From The Brighton Toy and Model Index
(Redirected from Meccano Ltd.)
Jump to navigationJump to search

Meccano Ltd. was founded by Frank Hornby in 1908 to manufacture Hornby's metal construction kits, and became one of the biggest and most influential toymaking companies in Britain in the first half of the Twentieth Century.

Hornby's metal sets had previously been sold as "Mechanics Made Easy" by "Elliott and Hornby" (E&H). "E&H" had consisted of Frank Hornby (who was then working as a clerk in a meat importing company), and his employer, David Elliott, who loaned Frank five pounds to patent his invention in 1901, and then invested in Frank's new startup business.

The E&H business initially made a loss, but after a few years, "MME" sales started to escalate to the extent that Hornby was able to quit his day job, raise enough capital to buy out his employer, commission a logo for the product under the new name "Meccano" (UK Registered Trademark UK00000296321, September 1907), and launch Meccano Ltd as a limited company. Most Meccano parts had previously been made for Hornby by local engineering companies, but problems with the large number of different suppliers and inconsistent build quality and delivery times made it clear to Hornby that he needed to manufacture most (if not all) of the parts in-house, and the capital raised for Meccano Ltd allowed the company to move from 10 Duke Street to 274 West Derby Road. 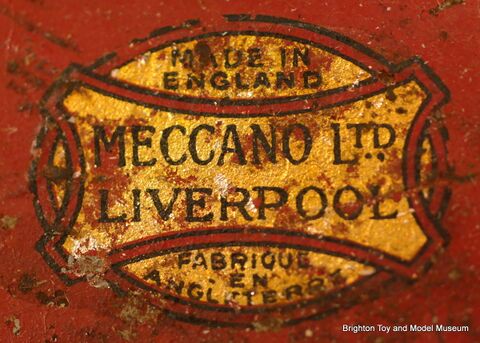 Sales continued to accelerate with the new catchy brandname, with and the company kept having to move to larger premises, until in 1913/14, Hornby took the decision to build a new factory on a plot of land at Old Swan that was large enough to allow for continued expansion for the foreseeable future. Hornby made astute use of social networking, running Meccano competitions to raise interest in the product (and obtain new designs), and founding the Meccano Guild. With Meccano Magazine promoting Meccano almost as a religious movement, and the company writing whimsical stories set in Meccanoland, the Binns Road factory assumed a mythical status.

When the unpopularity of German-produced products after WW1 broke the previous dominance of German companies, Meccano Ltd moved into model railways, with the Hornby Clockwork Train introduced in ~1920, initially as an extension of the Meccano system. The new Hornby Trains became wildly successful, and when the advent of new miniaturised clockwork and electric motors made smaller model trains possible, Meccano launched Hornby Dublo, using the new half-size 00-gauge track size that had been pioneered by Bing (and Stefan Bing's Trix company), with Bassett-Lowke.

As the range of Hornby gauge 0 accessories grew to include last lead figures and miniatures, Meccano Ltd reinvented their lead Hornby Modelled Miniatures range as Dinky Toys, using the new "MAZAC" metal alloy, and the rate at which the Dinky range expanded meant that the company effectively had the UK market for diecast toys to itself for over a decade.

Meccano Ltd didn't seem to miss a trick when it came to promotion and developing brand loyalty, and the company founded networks of clubs and experimented with a range of publications that promoted the Hornby and Meccano names, the most successful being Meccano Magazine, which carried serious articles on engineering news and (engineering-related) current affairs.

After the success of the Meccano Guild as a tool for supporting users and promoting the brand, the company went on to found the Hornby Railway Company (for users of Hornby Trains), the Dinky Toys Club, and the Hornby Speed Boat Club.

Meccano Ltd had trouble adjusting to the post-war environment. Without its founder (who died in 1936) it had trouble replicating the innovation that had characterised its early and between the wars years, and it failed to embrace new markets and new technologies such as plastics. Meccano "coasted" on the basis of its existing ranges for too long - Meccano was already too complete to lend itself to radical change, the larger "gauge 0" trains were now "legacy" products that reverted to being clockwork-only, the Hornby Dublo trains were expensive, troubled by a difficult switchover between three-rail to two-rail formats, and difficult to make more cheaply, and while the Dinky Toys range continued to be updated, it became subject to ferocious competition from Corgi Toys and other companies.

Meccano Ltd were bought out by fellow UK toymaking giants Lines Brothers in 1962/63, who updated the product lines but in turn went bankrupt a few years later in 1971 and had their assets bought by Airfix.

Binns Road finally closed their doors in 1979, marking what many saw as the end of an era in British toymaking.

This category has the following 81 subcategories, out of 81 total.