Markings are "GREAT WESTERN" on the side-tanks, and "2221" in smaller characters on the cab.

The loco appears in the 1931/32 Hornby Book of Trains described as just Hornby No.2 Electric Tank Locomotive. The No.2 Special Tank locos appeared at the end of 1929, the GWR version changed its number to "2221" in 1930. 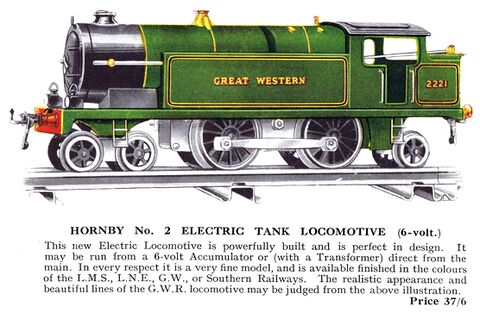 Hornby No.2 (Special) Electric Tank Locomotive, from the 1930-31 Hornby Book of Trains (without lightbulb)
Retrieved from ‘https://www.brightontoymuseum.co.uk/w/index.php?title=Locomotive_GW_2221,_No2_Special_Tank_(Hornby_Series)&oldid=57385’
Categories:
Hidden category: