A dark green electric Hornby Southern 0-4-0 No.1 Special locomotive and tender, numbered 1179, with white lining, circa 1935.

The loco has an electric bulb on the front, has "SOUTHERN 1179" in large letters on the tender, and has "1179" in tiny white letters on a small black oval on the cab side. the side of the loco has a rectangular rounded with a red border and "HORNBY" in red letters, then "MADE IN ENGLAND / MECCANO LTD" in black. 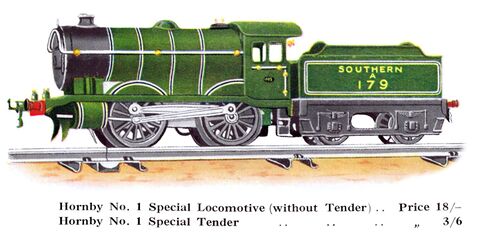 The earlier 1930 Clockwork version of the loco. The subsequent change in running number from A 179 to 1179 reflects the real change in Southern's numbering system that took place in 1931, as letter prefixes for the different train companies that had been merged to produce Southern in 1923 were replaced by an extra digit
Retrieved from ‘https://www.brightontoymuseum.co.uk/w/index.php?title=No1_Special_Locomotive,_electric,_Southern_1179_(Hornby_Series_E120)&oldid=12691’
Categories:
Hidden category: