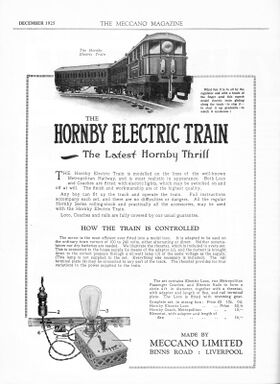 1925: The Hornby Electric Train, 110V – the "thrill" was very real (and potentially fatal) if you touched the rails. [image info]

A gauge 0 high-voltage, "HV" (110V) Metropolitan electric underground locomotive, made by Hornby in 1925.

The "Hornby Electric Train" was the first electric loco made by Hornby, and in a break from Hornby tradition up until that point, was closely modelled on a specific real-life locomotive.

Although some of the more unusual features of the model (such as the wraparound handrail) can look to modern eyes as if they must have been added as a modelmaker's flourish, they are actually present in the originals. The locomotive's "skirt" was also useful to the model designers as it hid the model's slightly less authentic wheel configuration.

The first version of the Hornby Metropolitan loco had an additional level of realism in that - just like the real thing - it seemed to offer the possibility of accidentally electrocuting yourself if you touched the rails. The "HV" ("High Voltage") model's motor ran off one hundred and ten Volts AC current, which was obtained from the 240V mains power by passing the power through a lightbulb before it passed through the speed controller and reached the rails.

The idea of running 110V AC on a pair of exposed metal strips over a livingroom floor was a little alarming, and after questions were asked in Parliament, the model was quickly modified to run off 4 Volts, instead.

This new voltage was then found to not be sufficiently strong, and the voltage was changed, again, to 6V. Later in the model's life, the internal motor was replaced by a more standardised 20V reversing motor.

The model was also sold as a clockwork version.

The Metropolitan Railway was the World's first underground railway, with trains originally hauled by steam locomotives. The railway linked many useful locations in West London, and extended out into what became London suburbs after the new railway stimulated land development.

The use of steam engines in long underground tunnels was not ideal, and didn't create a wonderful experience for the passengers, even with special fittings to minimise smoke and sparks, and electrification was an obvious solution. The Metropolitan bought twenty "Electrical Multiple Units" in 1902, and then moved to separate electric locomotives and carriages.

The Hornby model should be compared to the newer locomotives made for the Metropolitan by Metropolitan-Vickers in the 1920s.