The wagon is blue with a blue base, buffers and type 3 trunions, bare metal couplings, and bright red end-bars and end-bar supports. The centre of the tank side is dominated by a bright yellow solid circle bearing the black diamond-shaped "Colas" logo, and the words, "For drives and paths" The tank also bears a yellow star, and has a yellow number 33 on its side and 952 on its end.

The Hornby Colas Bitumen Tank Wagon is essentially a simplified version of the Hornby United Dairies Milk Wagon, with the side-fillers and end-taps removed. This example also has simplified fixings for the diagonal reinforcing struts - instead of being threaded and fitted with end-nuts, the ends are kept in place by crushing the rod ends flat, so that the rods are kept captive by their flared metal ends.

The wagon was introduced in ~1929, but the piece's crossbarred trunions suggests a date later than the illustration in the 1930 Hornby Book of Trains, and the colour combination dates this example to not later than 1936. 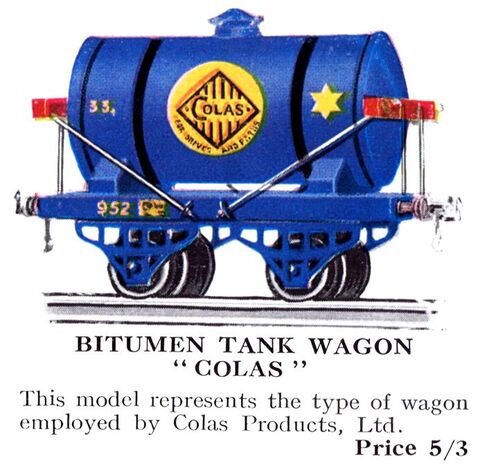 Colas was founded by Hugh Alan Mackay and George Samuel Hay, who both filed patents (in 1925 and 1926) for methods of mixing bitumen with water (and starch, and other additives) to make a smooth and manageable emulsion whose properties could be adjusting by altering the amount of included water. The name Colas was as a compaction of "Cold Asphalt".