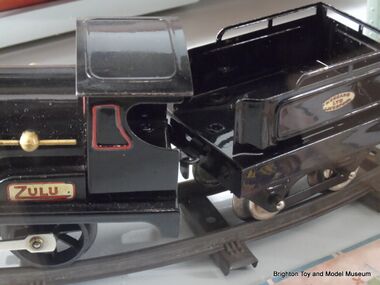 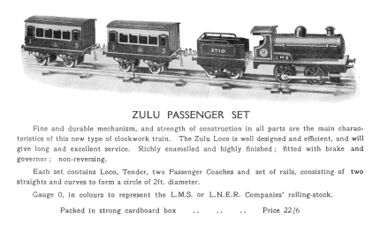 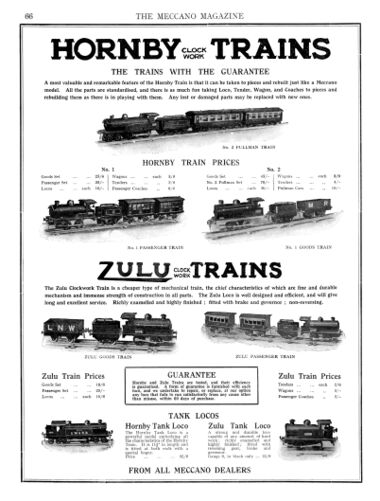 Meccano Ltd.'s ZULU range of model trains was introduced in the May-June edition of Meccano Magazine, 1922, as a followup to the Hornby Clockwork Train and the Hornby Tin-Printed Train.

Where these two initial "Hornby" locos represented the company’s "standard" enamelled and printed tinplate locos, it was obvious that there was a need for something that looked as shiny as the enamelled Hornby train, but was more affordable. Since the Hornby train was still being aimed at the "constructional" market, there was an obvious opportunity to make a train that was less expensive to build, which reverted back from the "constructional" nuts and bolts to more standard (and cheaper) permanent joints.

The advert to the right shows that the Zulus were considerably cheaper than their Hornby counterparts – the "Hornby" 0-4-0 loco is listed at sixteen shillings, whereas the "Zulu" version is ten shillings and sixpence.

All the Zulus also initially had simpler non-reversing clockwork mechanisms, although this soon changed. A further early simplification was that the Zulu locos were initially launched in a single colour, black. However, the finish of the Zulu paintwork – an expensive-looking high-gloss enamelled black – was still excellent, and the range became a favourite.

Some of the more evocative train-service names used on British railways didn’t come out of a marketing department, but were initially coined by railway staff, with the more popular names eventually ending up in official use on timetables – this may explain why a few of Britain’s trains seemed to be named after racehorses!

The Zulu range are supposed to be named after the afternoon 3pm GWR train service between Paddington and Birkenhead, Merseyside, which was nicknamed The Zulu Express. The reason for this seems to be that this train service started in 1879, a year that was also marked by the start of the Zulu war.

As the Zulu range expanded, including a reversing-motor tank loco and becoming available in other colours, the distinction between the Zulu and Hornby ranges began to erode, and with the popularity of the Zulus, Meccano Ltd. seem to have decided that perhaps these trains ought to be promoting a more obvious in-house brand name. Additionally, another main distinction between the two brands - that the Hornby trains were "constructional" and could be disassembled - was about to disappear.