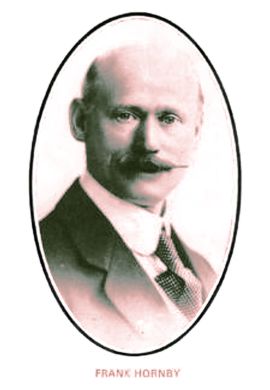 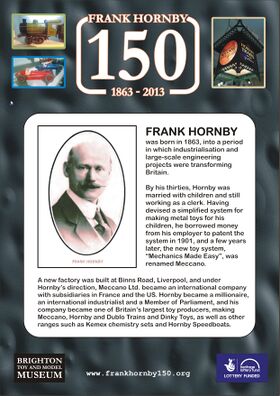 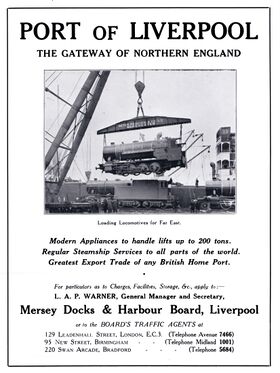 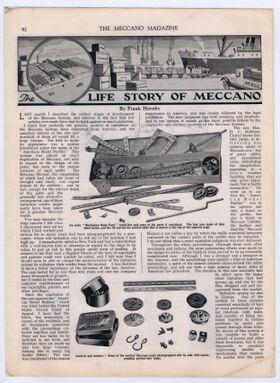 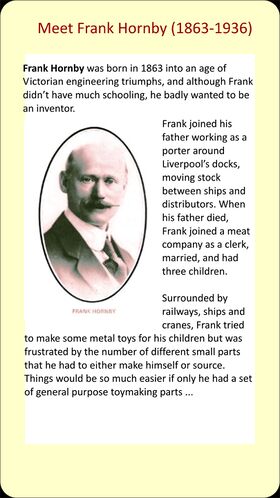 Frank Hornby (1863-1936) has the distinction of being responsible for originating not just one, but three of the biggest British toy brands.

Born in Victorian England in the the international port city of Liverpool, Hornby's father was a dockyard porter, and young Frank was brought up in a culture of Victorian self-help and Victorian engineering, amidst railways, shipping, bridges and cranes.

Frank doesn't seem to have gone to school much, and helped his father at the docks, instead. When Hornby Snr. died, Frank went to work for a provisions merchant, as a clerk.

Frank badly wanted to be an inventor, and was inspired by typical Victorian stories in which the lone heroic inventor struggles against all the odds amidst miserable poverty, to eventually win out by dint of Sheer Perseverance and Moral Character. What these stories didn't tell their readers was that most inventors weren't successful and remained in miserable poverty until they died, either because of not having a sufficiently strong business plan to capitalise on their Big Idea, or because with hordes of fellow inventor-wannabes all chasing the same mythological super-inventions, one had to have a particular unique "angle" that nobody else had in order to be able to create inventions that nobody else had thought of. In the case of George Pullman, inventor of the wooden luxury Pullman railway carriages, his background was coffin-making, engineering and Chicago hotels, and the result was a set of luxury wooden boxes providing a hotel-class service on wheels. Whether he realised it or not, without that unique angle, Hornby's chance of realising his dreams was slim.

Hornby worked diligently at his office day job, and quietly assembled a set of tools in his garden "inventing shed", until he met Clara Godefroy (1861-1953) at a local church choir meeting, after which marriage and children quickly ensued. While it was common for fathers to make toys for their children out of wood, Frank's environment was filled with metal and engineering, and decided on a slightly ambitious plan to make a toy crane out of metal, instead. Running into the frustration of having to source or make too many different types of small parts for his model, a frustrated Frank decided to make life easier for himself by devising a simple standardised set of parts. If the parts were sufficiently general-purpose (with only one type of nut, and one type of bolt), he could concentrate on building up a decent stock of general-purpose parts first, and worry about how best to assemble them later. Folded metal strips could have holes punched or drilled along their length at regular intervals, the same holes could be used to take either nuts and bolts or axles for wheels, and once a toy had been made, it could be taken apart and reassembled into something else.

Hornby found that not only did the parts let him build different sorts of toy, but the process of building was fun in itself. He'd invented a construction toy.

Borrowing five pounds from his employer David Elliott, Hornby patented his new system in 1901, and started selling crude sets of parts, in tins, as "Mechanics Made Easy". Shopkeepers were slightly incredulous about the sales opportunities of Frank's rather roughly-made sets, and sales were initially slow, but after writing to Henry Selby Hele-Shaw (Chair of Engineering at the University College of Liverpool) and getting a letter of support, Hornby exploited the letter relentlessly, and sales eventually started to take off. "Elliott and Hornby" moved though a succession of workspaces until 1907/1908 when Frank was able to quit his day job, raise enough capital to buy out his employer's stake in the business, trademark a new name for the toy, Meccano, and acquire a site in Liverpool to build a proper factory from scratch.

With the Binns Road factory starting to churn out the new "Meccano" sets in increasing quantities, Frank did almost everything right. Hornby had initially had trouble getting distribution for his products, so Meccano Ltd. had their own distribution network, which created a ready-made channel for all their subsequent products. From his time as a Liverpool clerk, Frank knew accounting and import-export, and had an eye on foreign markets almost from the beginning, with Meccano literature being translated into French surprisingly quickly. Some of the company's initial Meccano building designs weren't that great, but Frank used the modern technique of crowd-sourcing to get his customers to design models for the company, offering big prizes for the best designs, with the company owning all designs that were sent in. And of course, in order for a design to be eligible, you first had to buy yourself enough Meccano to be able to build it ...

Under Frank's supervision, the company organised special events, and encouraged a network of clubs around their product ranges that resembled a cross between the Walt Disney's Mickey Mouse Club and Baden-Powell's Boy Scouts.

Frank had always liked trains, but the hold that German metal toy giants Bing and Marklin had over the model railway market internationally meant that it wasn't worth trying to compete. Things changed with World War One, with the UK Board of Trade keen to encourage British manufacturing to enter markets previously dominated by the Germans, and to use the absence of competition during the War period to build businesses that could continue once hostilities were over. After constructing some prototypes and an odd tabletop train game, Hornby launched the gauge 0 Hornby Clockwork Train in ~1920, with adverts in the company's new Meccano Magazine.

With British shops reluctant to stock German-made toys after the War, persuading the existing enthusiastic Meccano fan-base to buy the new British-made Hornby Trains wasn't difficult, and the new trains were a great success. They were later joined by dedicated motorcar construction kits and aeroplane construction kits, with their own specialised parts.

The Binns Road empire also expanded into chemistry sets, electricity sets and model racing boats, with the Meccano Guild club being joined by the Hornby Railway Company club, and the Hornby Speedboat Club, all with their own literature and badges and local networks and events. Hornby Modelled Miniatures, a "catch-all" offshoot brand launched in 1931/32 to product miscellaneous diecast figures and vehicles for use with Hornby model railways turned into Dinky Toys in 1934 and became Frank Hornby's third world-famous UK toy brand.

Frank's early days at helping his father at Liverpool docks and his early work as a clerk in an import-export company meant that he was always very conscious of the potential of international trade, and even some of his very earliest sets were made available with instructions translated into French. International sales were The Future, and it was logical that his children would be running the companies that would be the "children" of Meccano Ltd.

Frank and Clara had three children, Roland Hornby (1889-1965), Douglas Hornby (1890-????) and Patricia Hornby (1899-1913). Patricia died tragically young, but Douglas and Roland were groomed to inherit European offshoots of the business, with Douglas and Roland being schooled in Germany and France, respectively, so that they would understand the local cultures.

Frank Hornby's attempt to set up a German offshoot of Meccano Ltd was doomed by bad timing – Hornby had not believed that Britain and Germany would ever actually go to war, and set up the German offshoot just before the outbreak of WW1, the story being that he managed to get the very last train out of Germany before the War was officially declared (his manager was less lucky and spent the War interned). The German company was appropriated and the rights to manufacture Meccano acquired by Märklin, who continued to manufacture their own version of Meccano after the War as Märklin-Metallbaukasten. Douglas' assumed place in the company therefore never fully materialised. Douglas might not have been the ideal person to take on the position anyway – he didn;t seem to be as interested in the business and had a habit of getting into trouble, culminating in a car crash that left him with long-term problems.

The French offshoot of Meccano Ltd (founded as a joint venture between Frank and his son Roland) fared rather better. Under Roland, Meccano France produced their own local ranges of Hornby Trains and Dinky Toys and originated products like Elektrikit. The French company survived the demise of Meccano Ltd. in the UK, and is still producing Meccano today, sold as abroad as "Meccano" and "Erector".

The third major planned offshoot of Meccano Ltd was Meccano Corp, which Frank set up in the US with a factory in Elizabeth, New Jersey. Meccano Corp didn't do as well as Hornby had hoped, finding itself having to weather the American Great Depression and having to compete with better-established local companies. The Elizabeth factory seems to have met its end with the construction of Federal Interstate Highway #1 which appears to have driven through the factory's location. The US rights to Meccano were bought by US firm A.C. Gilbert (makers of "Erector"), but details of the transaction are hard to come by, as it seems that Frank didn't enjoy talking about the episode.

Hornby died in 1936, just as the company was gearing up to launch a new tabletop railway brand, Hornby Dublo (1938). The company continued with its emphasis on metal toys after WW2 (1939-45), but were slow to understand and embrace the new technological breakthroughs in plastic toy production, and Meccano Ltd. finally went bust in the mid-1960s, with their assets taken over by Lines Bros., a large UK toy manufacturer who produced both metal and plastic toys under the Triang brand-name. Lines then went under too, and were bought by Airfix.

Lines merged Hornby Dublo with their own Rovex "Tri-ang Trains" brand to produce Triang Hornby, but the lineage of the resulting plastic-shelled model trains probably owed more to the Rovex product line than the Hornby influence.

Hornby's success was partly due to him being the right person with the right skills and personality, in the right place, at the right time. If he'd been born in London rather than Liverpool he might not have had the interest in cranes and shipping and international trade, and if he hadn't spent those years as a clerk for a trading company, he might not have been able to manage and run a major multinational empire. The unusual thing about Hornby is that where most young men with wildly ambitious dreams put them on hold when they have children, in Hornby's case it was having children (and spending quality time with them) that gave him his break. And of course, all the hard work and emphasis on self-improvement didn't hurt.

From being a shipping clerk in his thirties with no obvious alternative career path, Hornby managed to turn Meccano into his escape route to becoming a globe-trotting industry mogul and even, briefly, a Member of Parliament. His legacy is the three main distinctive and much-loved ranges of toys that he left behind - Meccano, Hornby Trains (and Hornby Dublo), and Dinky Toys.

Between regular trips abroad, Hornby lived in the Liverpool area all his life, and described himself as "a Liverpool man". He's buried in Maghull, Merseyside, in a family grave started for his daughter Patricia.