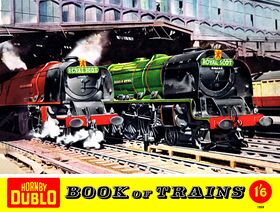 The set also includes two dark red carriages with grey roofs, numbers M 4193 and M26143, and track. The train set has its original box, with the set's details on a large yellow rounded-cornered sticker.

When Hornby launched their two-rail system, the original Duchess-Class loco selected for the two-rail version of the "Montrose" model was 46245 City of London, finished in red.

The Duchess of Montrose ran from 1938, and was designed by W.A. Stanier. It was part of the "third set" of the first fifteen Coronation/Duchess locos ordered (five in streamlined blue, five in streamlined red, and these five conventional-looking, unstreamlined locos, 6230-6234).

Further batches of the Coronation/Duchess class were built, both in streamlined red and in the unstreamlined "Duchess" form. All of the streamliners in this class were eventually converted to this more conventional configuration.