The crossing has four white rounded-top gateposts and four white five-bar crossbar gates, each with an attached red warning diamond and the words "BEWARE OF THE TRAINS". Gates have lifting anchor pins. The crossing has two lines of integral wheel-guides, and Hornby/Meccano track push-fits into either side. The rounded-rectangle "HORNBY SERIES" logo is screenprinted on the grassy area by one of the white posts.

Although this appears to be a No.2 Level Crossing, technically, it dates back to before that name was introduced.

Hornby started producing tinplate level crossings in 1924, and the revised "New" No.1 and No.2 level crossings appeared in 1928 with the diamond signs integrated into the gate pressings. This model is earlier, and its "separate" diamonds (applied as separate diamond-shaped pieces of metal) and side-slots date it to around 1926-1928. 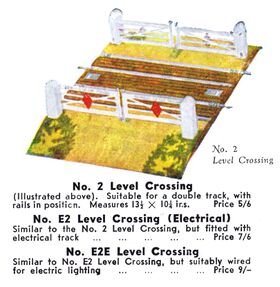 Catalogue illustration of the slightly later No.2 Level Crossing