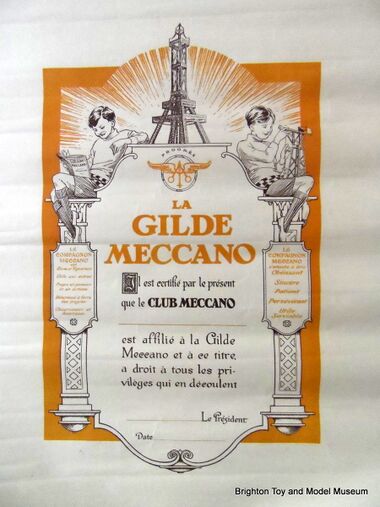 The Meccano Guild was launched in September 1919 as an umbrella organisation for local Meccano clubs, with the Meccano Magazine serving as a club magazine (in addition to all it's other functions). Prior to the launch, the magazine had run a competition for essays on how entrants would choose to set up a Meccano club.

Meccano Magazine's "Guild" columns then carried regular communications, advice and discussion on running clubs, and each issue also normally featured a small photograph and profile of a local club secretary.

The natural successor to the Meccano Guild is the International Society of Meccanomen.

A Fellowship of Meccano Boys
More than a million boys in Great Britain derive their greatest indoor pleasure from Meccano. They form local Clubs amongst themselves for the discussion of Meccano topics, and for mutual help. Thousands of them write to us and ask us to put them in correspondence with other boys, and to help them to start Meccano Clubs where they can meet their Meccano chums. We feel that the time has come for the formation of one great fraternal organisation of which all Meccano boys should become members, and we have pleasure in announcing that we have completed our plans for bringing this about in such a way that even the most lonely boy shall be able to take his part and share the happiness.

The objects of the Meccano Guild are:

(a) To make every boy's life brighter and happier.
(b) To foster clean-mindedness, truthfulness, ambition, and initiative in boys.
(c) To encourage boys in the pursuit of their studies and hobbies, and especially in the development of their knowledge of mechanical and engineering principles.