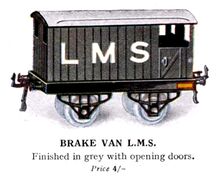 The LMS Brake Van (with no chimney) that presumably replaced this GNR-marked version, from The Hornby Book of Trains, 1925. [image info]

The van is brown with a white curved roof with chimney, has a hinged side-door with folded metal handle, and black pierced "type 2" trunions on a black base. Physically, it corresponds to a "GW" brake van in the 1928 Hornby Book of Trains.

The reason why this piece is placed alongside the very early MLDL rolling stock is presumably because the GNR markings suggest that it's one of the earliest "Type 2" pieces of Hornby rolling stock - probably pre-1925 and perhaps even slightly earlier. Although a physically identical item appears in the 1928 Hornby Book of Trains in grey and white, with "Great Western" lettering, the catalogue entry makes no mention of a GNR version, and the Great Northern Railway (GNR) disappeared on the first of January 1923 with the formation of the LMS railway company.

The 1925 Hornby Book of trains has an LMS brake van that's slightly different, but since the LMS superceded the GNR, it seems likely that our model is a pre-1925 piece whose tooling was later ressurected to make the 1928 "GW" version.