Mechanics Made Easy was the name of the metal construction sets invented by Frank Hornby, which later achieved fame under the revised brandname, Meccano.

An example of the "Mechanics Made Easy" box lid artwork, from a Meccano Magazine retrospective article published in 1932. Interestingly, this example lists the manufacturer as "Frank Hornby" rather than "E&H" [image info] 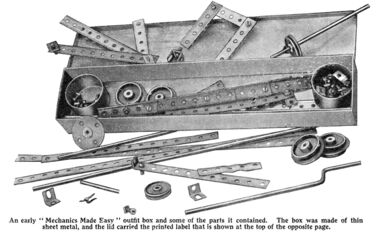 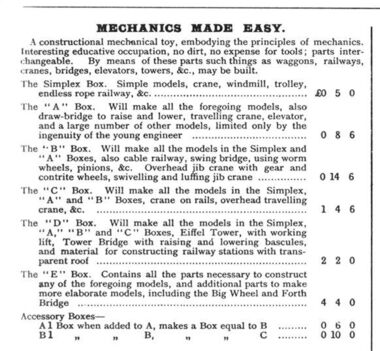 Once Hornby had patented his system (in 1901), he set about producing an initial amount of stock, which started to be advertised in 1902.

Mechanics Made Easy was "almost-Meccano" - it used slotted fixings to attach wheels to axles (as shown in the 1901 patent), and its strips were tinplate with edges folded for thickness and rigidity, simply guillotined with flat ends (since these were easy to fabricate without needing the sort of heavier equipment required to make the sorts of stamped steel round-ended strips that we now associate with "Meccano proper").

A constructional mechanical toy, embodying the principles of mechanics. Interesting educative occupation, no dirt, no expense for tools; parts interchangeable. By means of these parts such things as waggons, railways, cranes, bridges, elevators, towers, &c., may be built.

The "A" Box. Will make all the foregoing models, also draw-bridge to raise and lower, travelling crane, elevator, and a large number of other models, limited only by the ingenuity of the young engineer. £0 8 6

The "B" Box. Will make all the models in the Simplex and "A" Boxes, also cable railway, swing bridge, using worm wheels, pinions, &c. Overhead jib crane with gear and contrite wheels, swivelling and luffing jib crane. £0 14 6

The "D" Box. Will make all the models in the Simplex, "A", "B", and "C" Boxes, Eiffel Tower with working lift, Tower Bridge with raising and lowering bascules, and material for constructing railway stations with transparent roof. £2 2 0

The "E" Box. Contains all the parts necessary to construct any of the foregoing models, and additional parts to make more elaborate models, including the Big Wheel and Forth Bridge. £4 4 0

The MME outfits were sold under the name E&H (for Elliott and Hornby), and as more sets appeared, the basic Meccano sales structure emerged, with an escalating series of lettered sets that each contained all the parts of its predecessor (and then some), and add-on sets that let the buyer convert the contents of one set into those of the next set up. This was a brilliant idea that made it easier for buyers to make a decision - if they accidentally bought a set that turned out to be smaller than they wanted, they could remedy this with an accessory addon pack at a later date.

As the system started to take off, Hornby recognised that a reorganisation was required, and trademarked the new name, "Meccano", commissioned a new logo, and prepared to reboot the financial and manufacturing basis of the new company that started life in 1908, Meccano Ltd. The new Meccano sets adopted a similar structure to Mechanics Made Easy, but the sets were numbered rather than lettered to avoid confusion between the ranges.

Pages in category ‘Mechanics Made Easy’

Media in category ‘Mechanics Made Easy’