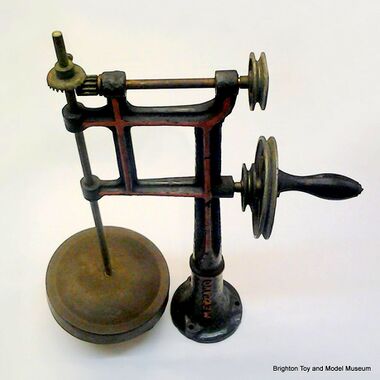 Meccano Butter Churn, original and unrestored. Note the raised "MECCANO" lettering on the side of the cast foot [image info]

A black cast-iron butter churn with red side-detailing, made by Meccano Ltd., circa 1912.

The churn was supplied with a flat wooden base, with a cast-iron stand fitted with a handle and drivebelt. This drove a small horizontal shaft held at the top of the machine, which then, via a pair of gears, drove a vertical shaft that ended in a flat pierced paddle. This sats in a glass milk container with a metal cover, and churned it until the butterfat separated out.

The churn can be hand-cranked, or rigged up to be driven by an external motor.

The Museum has an example of the butter churn, without its original base or jar (pictured). The jars tended to go missing, and most surviving examples probably have replacement jars. Our example has now been fitted with a replacement base and jar, and we hope that it'll go on display shortly (2013).

This is one of the rarest and most difficult to find Meccano Ltd. items, and, like the circular saw, it's a bit of an oddity. What would have possessed Meccano Ltd to decide that what the Meccano range really needed was a cast-iron butter churn? it might have been that Meccano Ltd. realised that most of their range was aimed at boys, and that they decided to try to make a more kitchen-oriented piece to attract girls, but there ar evarious theories in circuation as to how the product came about.

Discussions of theories concerning the possible origins of the piece often involve the names of competing German toymaking companies Märklin and Bing. Märklin originally specialised in kitchen equipment, so it would have been obvious for that company to have designed and made a piece like this, but period catalogues from Bing also show a cast-iron butter-churn that seems identical apart from not having the Meccano name cast into the base of the metal stand, leading a number of commentators to state that the Meccano item was actually made for Meccano by Bing.

However, the first sentence on the leaflet supplied with the Meccano churn is:

"The Meccano Churn is made in our own factories in Liverpool. ..."

Comparing online images suggests that the Bing product was pretty much indistinguishable from the Meccano one (even including the same painted side-fork detail), apart from the fact that the Meccano version has the word "MECCANO" set into the foot of the moulding, and the Bing version doesn't. So was this a modified casting, or did one company copy the other, or did both copy an older design? Or perhaps the similarity is due to both designs being close copies of an existing real butter churn design - we don't currently know

Price 2/6
The Meccano Churn is made in our own factories in Liverpool. It makes first-class butter, gives interest and amusement, and furnishes an insight into an important branch of dairy work. Butter made in a Meccano churn looks good and tastes good.
Have you ever seen real butter made? do you even know how it is made? if not, the Meccano churn will show you what a simple and interesting process it is. With this Churn you don't have to lift up the lid and peep in to see what is going on. You watch the whole process through the glass vessel.
----
Of all the best toy dealers, or MECCANO LIMITED, LIVERPOOL