Kayes Oil Can miniature (Hornby Oil Can No 2)

A miniature working copper Hornby Oil Can No.2 (K Type), very closely modelled on the full-size cans manufactured by Kayes from the late Nineteenth Century onwards.

Kayes perfected seamless cans, and the Hornby version is a faithful working miniature reproduction, down to the zig-zag patterning, the working pump and the "K" on the side.

The Hornby Oil Can No 2 is such a nice little item (and performs such a useful purpose for model train owners), that perhaps it shouldn't be surprising that if you wanted to lay your hands on one of these on ebay, you should expect to pay at least sixty pounds, and sometimes two or three times that. It's a historical miniature, and also a useful tool.

Kaye's were established in 1864 making general metal door fittings, and after they perfected their oil cans, this became the company's speciality.

Their cans had a large "K" on the side, and their printed adverts sometimes abbreviated the company name from Kaye's to K's. 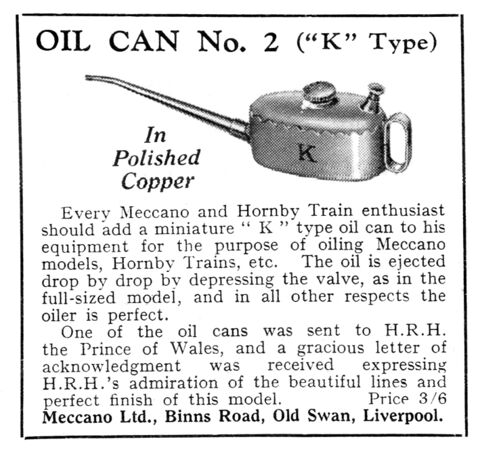