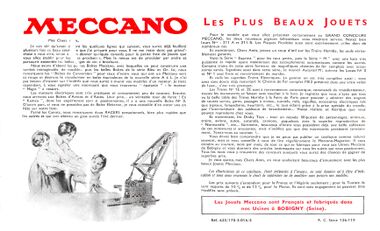 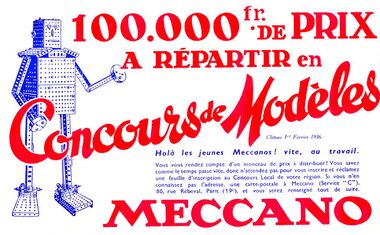 The French offshoot of Frank Hornby's Meccano empire was set up by Frank with his son Roland, with a factory opening in Belleville in 1912. A replacement factory opened in Bobigny in 1951, followed by another in Calais in 1959.

Meccano France was a success, and the company produced a mixture of Meccano Ltd. designs and their own localised designs, of French railways stations and other buildings, and French railway rolling stock, and later (with the advent of Dinky Toys) French cars.

Some of these French designs then fed back into the UK via Meccano Ltd.

Meccano France kept going when Meccano Ltd. went bust in the UK, and kept manufacturing Meccano, along with other sidelines - for instance, in the 1980s, while Star Wars plastic figures were manufactured in the US by Kenner and the UK by Palitoy, they were made on the continent by Meccano (France).

Meccano France still make Meccano at Calais, and in 2013 launched Meccano Evolution, a "back to basics" re-versioning of Meccano that returned to the system's original mechanical roots, with narrower strips and halved spacings between the holes, to allow a larger number of parts in a set for a given amount of metal.

2013 also saw the launch of Meccano Lab, a playspace and R&D centre in Calais site encourages educational play and Meccano-building.

The following 51 files are in this category, out of 51 total.