The bridge is supported by a grey rectangular base under each of the two feet, and has punched-and-twisted metal steps and a painted blue handrail "rim".

The Foot Bridge was listed in the 1925 Hornby Book of Trains as coming in two versions, with or without the attached signals. Rather confusingly, the 1925 catalogue lists the "signal-less" version as the No.2, and the more expensive version as the No.1.

The bridge was an obvious development of the "constructional" Hornby Lattice Girder Bridge, and was a lot cheaper, listed in 1925 as only costing 3/6 for the signal-less version, as opposed to 10/6 for the "full, nuts-and-bolts" Meccano-type bridge - it required less metal, fewer parts, and less assembly time. 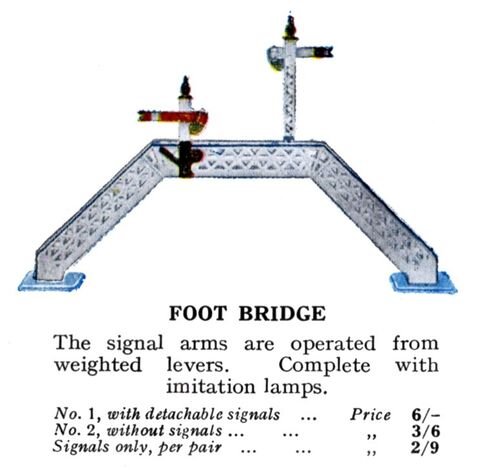 Hornby Foot Bridge No.1 and No.2, with and without signals (1925)
Retrieved from ‘https://www.brightontoymuseum.co.uk/w/index.php?title=Foot_Bridge_with_signals_(Hornby_Series)&oldid=18205’
Categories:
Hidden category: