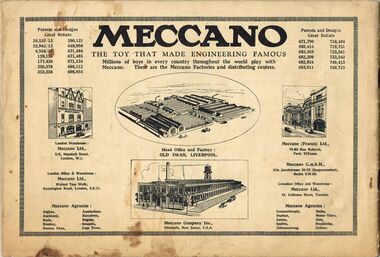 Frank Hornby's background working as a clerk at Liverpool docks for a meat importer gave him a strongly international outlook, and meant that he was already familiar with import/export procedeures that might have mystified most inventors.

His interest in international markets ws apparent quite early, with some of the "Mechanics Made Easy" promotional literature being bilingual (in English and French), and even shows up as a brief flirtation with the idea of making the system in metric sizes.

Hornby's two sons, Roland Godefroy Hornby (1889-1965) and Douglas Egerton Hornby (b.1890), were respectively educated in France and Germany, and groomed to run the future French and German offshoot businesses. This begs the question of whether Frank's international masterplan might have included his daughter, Patricia Elliott Hornby (1905-1919) perhaps eventually being in charge of the US offshoot company ... but since Patricia died in her early teens in 1919, we'll probably never know.

In Argentina, Exacto S.R.L. was started by a local Meccano enthusiast to make copies of Meccano parts to bypass import restrictions that prevented the real thing being available. After it had been agreed that these parts were at least as high quality as the Liverpool output (the Argentinians reckoned that theirs were better!) the resulting "Meccano - Industria Argentina" parts and sets were officially sanctioned as licensed products.