A green Hornby Series 4-4-0 electric No.2 Special locomotive and tender, SR 1759, "County of Bedford". Although the loco was one the four original members of the very popular "No.2 Special" tender loco range launched in 1929, this example is from the 1930's as evidenced by the updated numbering on its tender. 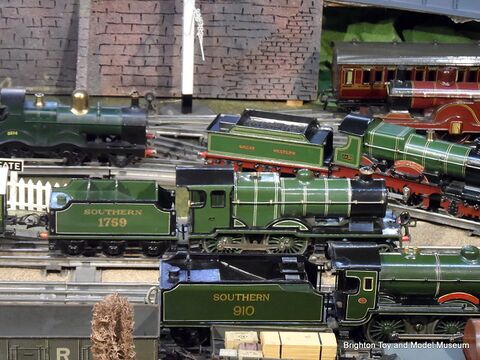 The locomotive on the 1930s layout 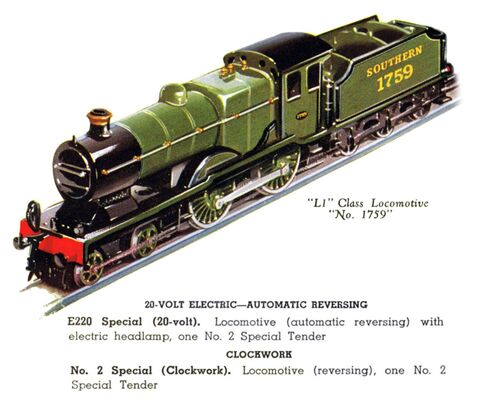 Locomotive (1)759 was a member of the Maunsell L1 Class, a set of 4-4-0 express passenger locomotives based on Harry Wainwright's slightly earlier L-Class designs. The L Class was put into production after Wainwright's retirement by Richard Maunsell, who then modified the designs to further "beef up" the locos, to create the L1 Class. Some of these successful modifications then ended up being retrofitted to the existing L Class locos.

Fifteen of the new L1 Class locos were built in 1926, to join the existing 22 Class L locos, which had been produced with some engineering from the German firm Borzig just before the outbreak of WW1 in 1914.

Loco 1759 underwent a few minor changes in numbering over its lifetime. Originally introduced in 1926 as A 759 shortly after the formation of the Southern Railway, Southern's rationisation of the conflicting number systems in its inherited stock meant that the loco was renumbered to 1759 in 1931. This meant that the Hornby model, launched in 1929 as "A 759", required a minor change to its name and paintwork to bring it up to date. The loco ended its career under the British Railways number 31759.