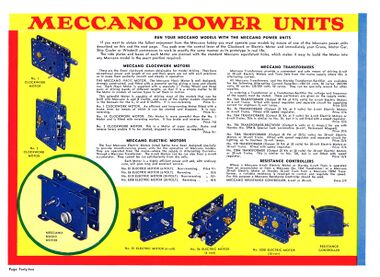 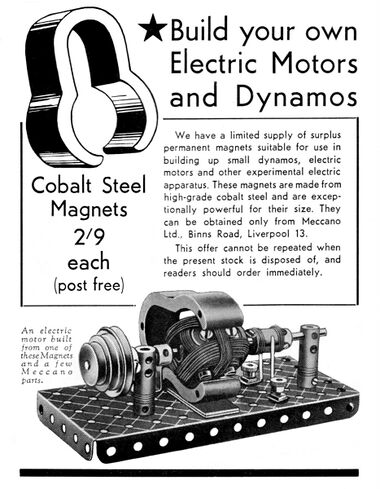 1939: "Build your own Electric Motors and Dynamos" [image info] 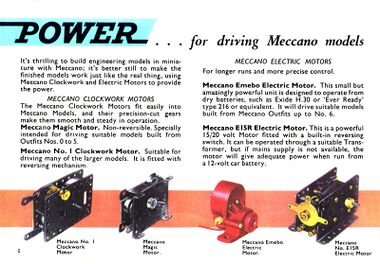 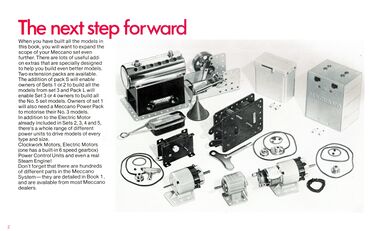 Inside the Meccano No.1 reversing motor

The motor casing is a pair of sturdy metal plates with Meccano holes around the edges, held apart by four spacers. There's a square winding key post on one side, and the output shaft is a Meccano rod threaded though a Meccano pinion that can be removed or adjusted so that the rod (or another, longer rod) can protrude from the winding side, the opposite side, or from both.

Behind the winding post is a large coiled flat strip spring, and behind that is a large gearwheel fitted with a slip ratchet arrangement so that the winding shaft can only wind in one direction.

This large gear (#1) drives a much smaller gear (#2, which has to rotate much faster to keep up. On the same shaft as #2 is a mid-sized gear (3), which engages with either one or two smaller gears depending on the reverse switch position, after which there's a small pinion which can be removed or replaced, and which is mounted on the final (removable, replaceable) output drive shaft.

Because of the multiple gearing stages, the output shaft runs much more quickly than the large gear attached to the unwinding spring, but is also considerably weaker.

Gear #2 also engages with another small gear on a shaft with a larger gear which then drives another small gear, giving another two boosts in rotation speed on the final shaft, which rotates very fast. This other output shaft is purely for control, and has two functions:

If the motor is designed to run naturally at a speed that makes the regulator cut in, then it'll run at a fairly constant speed no matter how tightly its spring is wound.