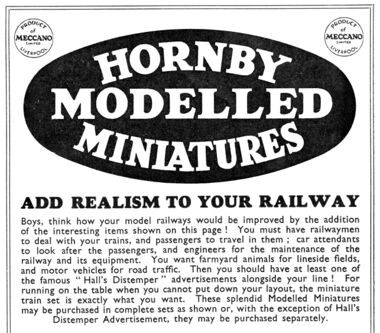 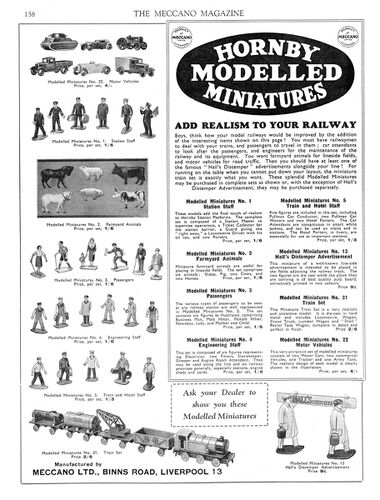 The Hornby Modelled Miniatures range existed in 1932-34 as a slightly random-looking mixture of cast lead gauge 0 trackside accessories and figures, and small cars, ships and other small-scale vehicles, including small push-along toy trains. The range also absorbed the occasional other "quirky" Hornby cast metal piece, such as the the Hornby Series "Halls Distemper" advert. 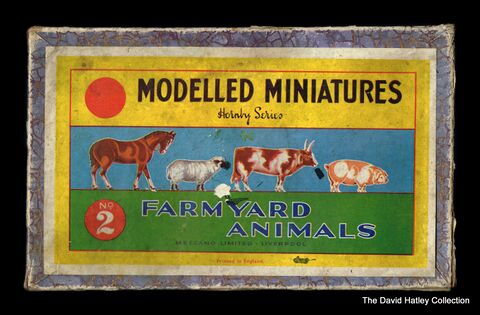 The first set (No.1, Station Staff) had had appeared briefly in Meccano Magazine "Hornby Accessories" adverts towards the end of 1931, but had stuttered in and out of the ads, presumably as Meccano Ltd. tried to decide on a wider strategy for how to place the brand. Lead-cast, the set No.2 (Farm Animals) seems to have had some issues, as the set pictured in the HMM adverts is distinctively different from the Set No2 that later showed up in the Dinky Toys adverts.

Whether this initial faltering start (at least, as far as the advertising was concerned) was down to production problems, or whether some pieces were initially being made for Meccano by another company such as Britains, or whether Meccano Ltd were simply holding off until they had a wider range to advertise under the Modelled Miniatures range isn't clear, but by mid-1935 the range was experiencing explosive growth under the new name Dinky Toys (1934), now cast in the new alloy MAZAK instead of lead, with a lot of the new pieces being ~1:43-scale cars.

ADD REALISM TO YOUR RAILWAY

Boys, think of how your model railways would be improved by the addition of the interesting items shown on this page! You must have railwaymen to deal with your trains, and passengers to travel in them; car attendants to look after the passengers, and engineers for the maintenance of the railway and its equipment. You want farmyard animals for lineside fields, and motor vehicles for road traffic. Then you should have at least one of the famous "Hall's Distemper" advertisements alongside your line! For running on the table when you cannot put down yur layout, the miniature train set is exactly what you want. These splendid Modelled Miniatures may be purchased in complete sets as shown or, with the exception of the Hals Distemper Advertisement, they may be purchased separately. 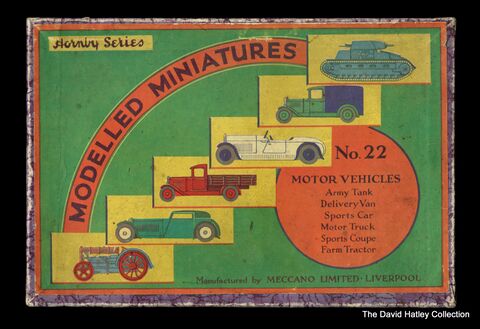