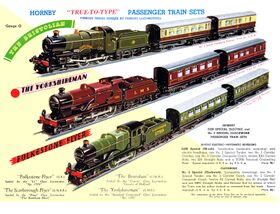 Three of the No.2 Specials and their passenger train sets, in 1938. LNER Bramham Moor is on a separate page [image info] 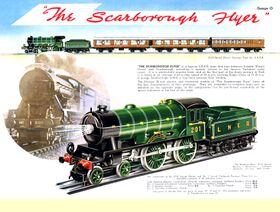 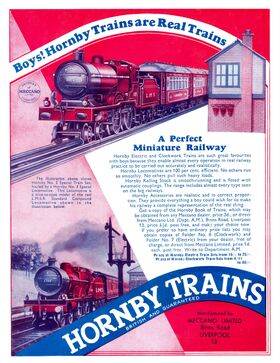 Britain's railway companies generally had their locomotives designed and built by their own in-house staff, so not only did the equivalent locomotives on different railways look different, to some extent, railways even had their own "styles" of loco design.

Up until the appearance of the 1929 "Specials", Meccano Ltd. had essentially made just one version of each "number" loco, and the degree of customisation for the different railways' versions was limited to paintwork and running number - underneath the paintwork, the LNER and GWR versions of a No.1 or No.2 loco were physically identical.

This changed with the Specials, which were physically tailored to correspond to the designs of the different railway companies.

The No.2 Specials and their train sets were marketed as "True To Type" / "Famous Trains hauled by Famous Locomotives", and not only was it exciting to have Hornby locos that were physically customised to match the original engines, but the No.2 specials were also very, very keenly priced (to the extent that they were initially priced so low that there had to be a major price bump the following year).

Compared to the 4-4-2 "Number Threes", it probably also felt more exciting and more "patriotic" to have new trains that were genuinely new designs based on British locos, rather than being simply repainted versions of a loco that Hornby had already heavily marketed as being French (a process that had probably left some of their customers in Britain feeling somewhat underwhelmed).

The No.2 specials were initially launched as four versions, with the corresponding train sets eventually being (by 1938):

By this time, loco LNER 201 Bramham Moor had replaced the original 1929 LNER No.2 Special loco, 234 Yorkshire, perhaps to avoid confusion with the name of the No.2 Special LMS "Yorkshireman" train set.