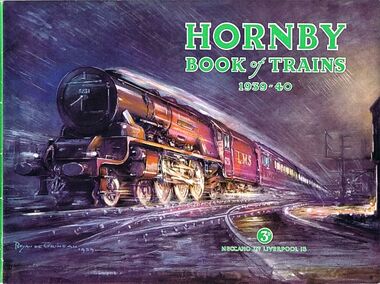 The Duchess of Atholl, featured on the cover of the 1939/40 issue of the Hornby Book of Trains [image info] 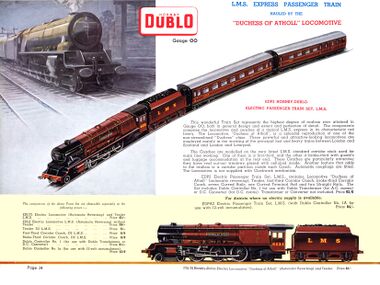 Hornby Dublo Duchess of Atholl loco 6231, from the 1939 Hornby Book of Trains

The set was originally announced and advertised in Meccano Ltd.'s publications in 1939, just before the outbreak of World War Two, but it didn't quite manage to go into production before the shutdown in toymaking at the commencement of WW2, with the result that people who wanted to buy the train set didn't get a chance to see one until a few years after hostilities had ended, nearly a decade later.

It might seem surprising that Hornby Dublo didn't get back into its development stride until 1948, considering that WW2 had ended in '45, but after WW2, industry then faced further metal shortages and war work because of the Korean War.

" This wonderful Train Set represents the highest degree of realism ever attained in Gauge 00, both in general design and extent and perfection of detail. The components comprise the locomotive and coaches of a typical express train in its characteristic red livery. The Locomotive, "Duchess of Atholl", is a splendid reproduction of one of the non-streamlined "Duchess" class. These powerful and attractive-looking locomotives are employed mainly in the working of the principal fast and heavy trains between London and Liverpool.

The Coaches are modelled on the very latest LMS standard corridor stock used for main line working. One of them is a first-third, and the other a brake-third with guard's and luggage accommodation at the rear end. These Coaches are particularly attractive; they have real cut-out windows glazed with celluloid inside. Another feature that adds to the realism is a corridor partition inside each coach. Automatic couplings are fitted.
The Locomotive is not supplied with Clockwork mechanism.

For districts where no electric supply is available

Although many of the Duchess class started out as streamlined Coronation Class locos, Duchess of Atholl was one of the first batch of five that were originally built as non-streamliners.