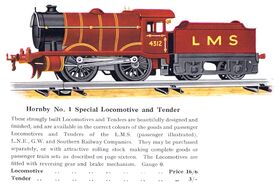 The Hornby No.1 Special [image info]

The No. 1 Special Locomotive, introduced in 1929, used a new mechanism which surpassed the one used by the No. 1 in power, significantly improving haulage capacity. The design was nearer contemporary train design than its predecessors; the addition of large boilers with safety valves and changes to the chimney and dome were among the amendments differentiating the range from previous models.

Electric E120 Special Locomotives were brought in during 1934, requiring large changes to the body to accomodate the large 20 volt reversing mechanism.

Comparing images from the 1929 catalogue (clockwork) and 1939 catalogue (electric), we can see that the No.1 Special was essentially unchanged, at least in the illustrations. It still has an arched splashguard over each wheel, the rear coupled wheel is attached to a drive rod, there's a wraparound handrail on the boiler, and there are two "fake" handrails on the sides of the cab, one horizontal and one vertical.