The Goods Platform underwent several changes over the years.

It shows up in the 1926 and 1927 editions of "The Hornby Book of Trains" as a simpler platform and crane, alongside a simple roof suspended on a pair of upright supports. In 1928, the simple supports-and-roof had been replaced with a full warehouse building, and the price had risen a little from 10/ to 12/6.

For the first three years of the new shape, the platform was a different colour each year, starting with greyish, then green, and then yellow.

This example has a green platform as shown in the 1929-30 edition, and has the same blue roof, red centre-tiles, green guttering and doors, and red crane base (although the crane on ours is green, rather than the blue shown in the 1929 catalogue). 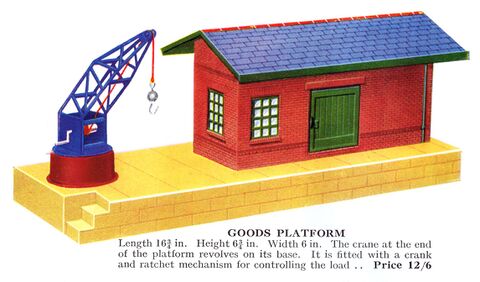