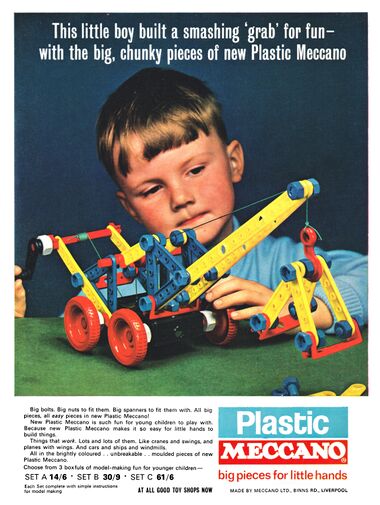 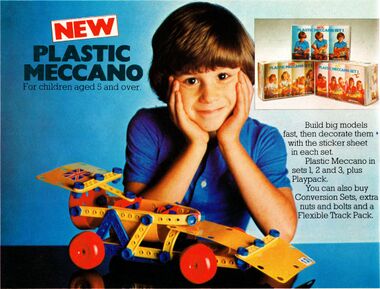 Plastic Meccano was introduced in (1965? 1966?), and tried to serve three main purposes: (1) to be a children's toy that capilaised on the brand recognition of the Meccano name, (2) to introduce children to the idea of playing with nuts, bolts and girders, so that they might later become part of the market for "normal" Meccano once they were older, and (3), to provide larger, sturdy parts for conventional Meccano modelling, that would have been too expensive to produce in metal, notably the black "caterpillar track" parts.

For boys and girls over 4 years

PLASTIC MECCANO – that large scale unbreakable system for real youngsters – has now been on the market for something like two years. In that time, it has grown tremendously popular, but in the past, Meccano Magazine has never featured new models to build with any of the three sets in the system. We on the new M.M. intend to rectify the situation by presenting a Plastic Meccano model whenever space allows and we begin this month with the Crane illustrated here. ...

... when compared to the standard Meccano crane on page 24, it proves that Plastic Meccano can be used to build, in a similar form, many of the things that can be modelled in metal Meccano. Incidentally, it is not generally appreciated that the two Meccano systems are really one! The Plastic Meccano parts can be used with complete success in conjunction with the traditional metal, and, in fact, there are several of the plastic parts which, by their use, enable far greater realism and more colour to be built into the traditional metal model.

Some examples of such "combination" models will be presented in future issues of Meccano Magazine, and we are sure that many of you will be suprised by the impressive effects that the marriage of plastic and metal can produce.

Plastic Meccano has been completely revised for 1977. Following a "big pieces for little hands" theme, the components have been re-collated into a whole new range of versatile outfits.

In addition to all the existing parts, some valuable new components have been introduced, including a Flexible Plate - of similar material to the metal Meccano system's Plastic Plates, and two different-sized Flanged Discs, all of which greatly increase the realism of the assembled models. (See photograph.)

As with metal Meccano, new Plastic Meccano is a "progressive" system consisting of three main Outfits, Set No. 1, Set No. 2, and Set No. 3, each set progressively larger than the one before it. Two Conversion Sets are also available, the 1A Set, and the 2A Set, the former converting Set 1 into Set 2, and the latter, Set 2 into Set 3.

Outside the progressive system, there is a new Play Pack, designed to introduce boys and girls to the pleasures of Plastic Meccano modelling, and the two accessory packs of Nuts and Bolts, and the Track Pack for fitting crawler tracks to appropriate models remain in the system.

The new Plastic Meccano Outfits are packed in up-to-date boxes with full-colour photo-illustrations of children with models.

PLASTIC MECCANO
Something for the young and the not-so-young

THERE WAS a time when the younger members of the family could only look upon the construction of Meccano models with envy as their older brothers deftly manipulated such awkward things as Nuts and Bolts, Set Screws, Sprocket Chain and Gear Wheels. Now, thanks to the introduction of Plastic Meccano, youngsters, too, can put pieces together almost as soon as they have learned to make up a uniform pile of wooden blocks or other similar simple exercises in co-ordination of the hand and the eye.

The design of Plastic Meccano is based upon the standard spacing of Meccano Parts and is therefore a useful and remarkable extension of the system as a whole and a wonderful introduction to model-building for the youngest enthusiast. All components are moulded with great accuracy from a very high quality thermo plastic which combines flexibility with rigidity and roughness. It is very durable, washable and non-toxic so is an ideal material for the very young to handle. A large range of basic parts, modelled on their Meccano counterparts, are included in the Plastic Meccano range. They include Strips in four different lengths, a flanged Base Plate, braced girders and corner brackets as well as Double Angle Strips, Angle Brackets, Axle Clips, a crane Hook, Pulley Wheels, Road Wheels and Spindles. Most remarkable of all the plastic components, however, are the Sprocket Wheels, with highly, efficient and most realistic sprocket Chain, and Gear Wheels with beautifully moulded involute teeth. The Sprocket Wheels and Gear Wheels are keyed to the plastic spindles by a method which is found usually in high precision machinery only, and this is known as the collet construction. Crank handles and Road Wheels are also fixed in the same fashion i.e. by a large plastic lock-nut which passes over the spindle and engages a thread which is moulded on to one side of the bosses of each of the wheels mentioned. In each case the threaded portion of the boss is split lengthways for a distance of ½in. to allow the lock-nut to pinch the thread and make a tight fit of the boss on to the shaft.

Two sizes of holes are punched in the Plastic Meccano parts: one for standard-size Meccano Rods, Bolts and Screwed Rods, and the other – 3⁄8 in. diameter – to accommodate the special, large-size plastic Nuts and Bolts which are formed with hexagon shapes just like standard Whitworth bolts. Also supplied with each Outfit is a plastic Spanner designed to be a neat fit on the Nuts and Bolts and capable of making a tight joint without causing damage to the Parts. It is double ended to accommodate the larger lock-nuts used an the Gear Wheels etc. Two lengths of spindles 4 in. and 6 in. are available, both designed to fit exactly the large holes in the various Parts. In place, they run very smoothly because the quality of plastic used has an almost slippery surface so that all movements are silent and require no lubrication. The large Bolts are very easy for little hands to manage and, as they are brightly coloured, they are easy to find when it comes to clearing-up time. They, too, come in two sizes, 1in. and ¾in.

Every Plastic Meccano Outfit has a brightly-coloured model-building sheet on which working models are illustrated in attractive colours matching those of the individual pads. No written instructions are included, but the illustrations show the full details of the model at a glance and provide educational opportunities for the younger children to exercise skill in observation and assembly.

Plastic Meccano need not be limited to the youngster, however. Certain Parts offer plenty of scope for more advanced modellers thanks to the foresight of the designers in keeping to standard spacing, thus allowing many plastic parts to be used successfully with Standard Meccano parts. In addition, the plastic Gears and Sprocket Wheels can be keyed to Meccano Rods using a Meccano Coupling, Part No. 63, as an internal boss. The Coupling is simply locked to the Meccano Rod with a short Grub-Screw. Part No. 69c, and the plastic Gear or Sprocket is secured over the Coupling by a plastic Collet-Nut.

On one side of the boss on the plastic Gears and Sprockets, a dog-clutch is moulded to engage with an adjacent Gear etc, if required. The slots in these dog-clutches may also be engaged by a pair of Set Screws in the opposite holes of a Meccano boss on a standard Pulley. Bush Wheel, etc., so that a plastic Gear or Sprocket can be carried between a pair of Meccano wheels or even Collars. The Gears have 12, 18 and 24 teeth respectively so that a number of ratios can be obtained with a powerful and silent drive. The Sprockets, with 10 and 20 teeth, give a 2:1 ratio and, as they can also be keyed to standard Meccano Rods, they can be employed to provide a rugged and realistic chain drive to the tracks of crawler tractors and other heavy mechanisms. The Plastic Meccano Axles are also a neat fit into the wide bores of the Meccano Socket Coupling, Part No. 171, so that large-diameter axles may be used for extra torque. Modellers using large-diameter wheels on Traction Engines or Heavy Tractors can make use of the Plastic Axles which not only pass through the large holes of the plastic Strips but also through the centre of the Meccano Circular Plates, Part Nos. 146 and 148a, as well as through the Hub Disc, Part No. 118 and the Wheel Flange, Part No. 137.

By arranging suitable spokes or a 'spider' the Meccano Gear Ring, Circular Girder and Circular Strip may also be employed with the Plastic Meccano Axles. A further important asset of the plastic Axles is that they are hollow and will accommodate a Meccano Rod, thus opening up the way to concentric drives and rear axle tubes.

A third plastic Axle is known officially as a Shouldered Spindle, having a shoulder and thread at one end and a thread at the other. Axles of this type can be used as half-shafts where powerful differential drives are required in heavy Meccano Models.

To sum up, Plastic Meccano, together with the special Outfits described in a previous chapter, widens the field of experiment and model building even further and is an excellent complementary addition to the Meccano System.