From The Brighton Toy and Model Index
(Redirected from Meccano)
Jump to:navigation, search 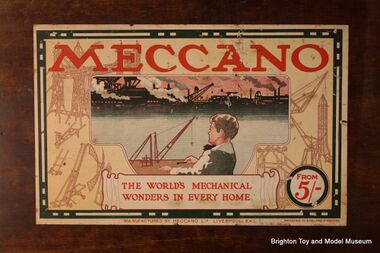 "Meccano: The World's Mechanical Wonders in Every Home" [image info] 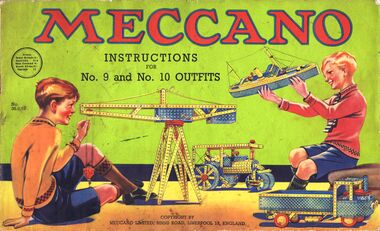 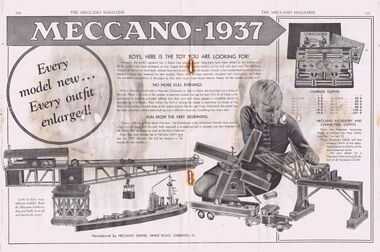 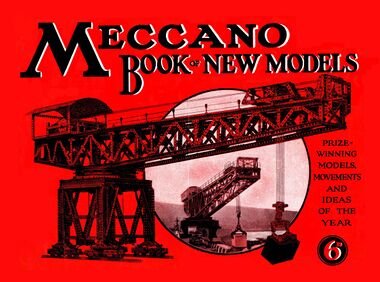 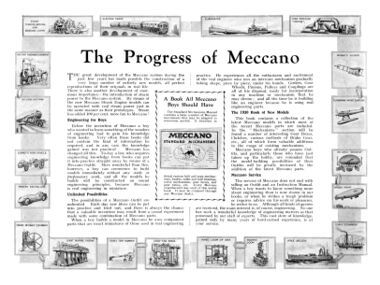 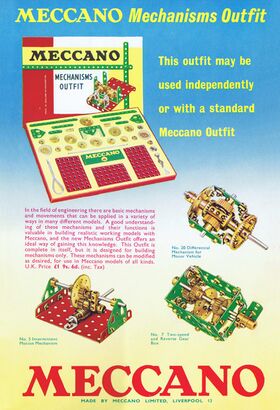 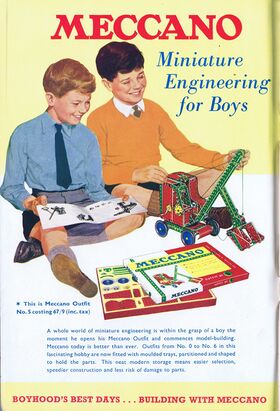 The Meccano metal construction toy was designed by Frank Hornby, and allows models to be built from perforated metal plates and strips, in conjunction with nuts, bolts, rods and wheels.

Hornby's original patent for the system that became Meccano was granted in 1901, and after starting out as a business with one employee, operating out of one room (and with the less-than-catchy name Mechanics Made Easy), Hornby's product finally got going with the help of a recommendation from a professor of engineering and a new name and commissioned logo, and Meccano Ltd. started as a limited company in 1908.

Although an early set designed by Hornby for the educational market described Meccano as having metric measurements, the finalised system used imperial measurements and was based on half-inch-wide strips with half-inch hole spacings (with holes designed to take rods and screws of 5/32 of an inch diameter).

Meccano's success was partly down to its stylised simplicity. The strips in "classic" Meccano sets didn't pretend to correspond to anything that existed in the "real world" of engineering, and (unlike the drawings in the original patent application) had distinctive rounded ends and corners that eliminated sharp points and allowed strip ends to be bolted together at any angle and still show a "flush" fit.

The emphasis on these more abstract "prototypic" geometrical shapes made a strong design statement -- while Meccano sets often included specialised types of cogs and other fundamental mechanical components with a a strict functional purpose (such as bevel gears and worm gears), Meccano resisted the temptation to make too many specialised parts solely for cosmetic reasons (outside very specialised sets, such as the airplane sets). Occasionally one could find specialised dedicated parts such as train buffers, but Meccano generally stayed fairly true to the idea that if you wanted a specific shape, you had to build it yourself. While other construction kit companies struggled with the problem of how to make parts as realistically as possible, Meccano created its own genre and design ethos, in a way that very few other toymakers were able to achieve (Lego being the obvious other case) - a Meccano model was very much a Meccano model, and was to be judged on that basis.

Meccano spawned a lot of imitators, but it's geometrical simplicity made it difficult to copy the basic idea without also copying the basic shapes, resulting in products that seemed to be cheap copies of Meccano ... which then further increased Meccano's reputation as the product that other people were trying to emulate.

The Meccano logo seems to have been regularly redrawn, but with certain features (such as the wide "M" and the distinctive tilted hole in the "o") remaining constant (usually!). Some early examples had an elegant 1920's almost "Art Nouveau" feel, with 1930s versions being more solid, sometimes with s thick outline. By the 1970s, the logo had become even chunkier, typically with thick borderless letters that were partly fused together.

Meccano Ltd. and the Binns Road factory went on to produce a number of other key brands, notably Hornby Trains and Dinky Toys, but these toys often also included the Meccano name, and sometimes had other references to the Meccano parent brand, such as the Hornby Trains gauge 0 lattice footbridge, which was clearly made to match and reference the lattice plates in Meccano sets.

The vehicles from the post-war "Mogul" offshoot brand shared the Meccano "M" and used just the first letter on their radiator grilles.

Faced with trying to promote and support a complex product with limited available resources, one of Frank Hornby's most successful early initiatives was to hold Meccano design competitions with substantial prizes. Since the company owned all entry designs, these competitions didn't just whip up excitement for the brand and encourage people to imagine what they could do with Meccano (or what they could do if they bought more Meccano) - they also gave the company a "crowd-sourced" library of sophisticated and complex designs that were, initially, rather better than what the company had managed to come up with themselves.

Meccano Magazine initially started out as a short black-and-white newsletter, but built up into a proper magazine with colour covers that carried serious encyclopaedia-style articles on engineering news and (engineering-related) current affairs. The magazine naturally carried heavy advertising for Meccano Ltd.'s products,and was used to announce new products and schemes, such as the Meccano Guild (which used its page in the Magazine as its official method of communication).

The Meccano competitions showed the company that staying close to your user-base paid dividends, and Meccano spend significant resources fostering a Meccano community, with users encouraged to write in with questions and suggestions and have them answered personally by Meccano Ltd. staff. As the user-base grew, it became clear that in order to maintain these levels of customer support, it was sensible to encourage users to create a network of local clubs that would become largely self-maintaining. This network, the Meccano Guild, gave local members a community to share information and experience with, a place to show off their models, and a social network that encouraged them to continue with the hobby.

After the folded and guillotined tinplate strips of "Mechanics Made Easy" had been replaced by modern stamped steel rounded-ended strips in "proper" Meccano, the system continued to evolve, with new parts appearing, and some older parts changing slightly. Wheel-fixing changed through two different "clip" designs before adopting screw fixings and more gear types and mounting bracket variations appeared.

After the appearance of steam engines for Meccano, safer and more convenient clockwork motors appeared, initially made by Märklin until World War One, and then made by Meccano themselves. Electric motors came next, initially made for Meccano by outside companies, and the clockwork and electric devices were refined and made more compact.

Meccano went through a lot of different colour variations, some major, some minor. Initially Meccano was bare metal-coloured, silver for plates and strips, and brass for the wheels, gears and shaft mountings.

1926 saw the arrival of "The New Meccano" in colour, with red and green painted parts. In the mid-1930s this changed to gold for the metallic strips and blue with gold cross-hatching for the plates, but when Meccano reappeared after World War Two, it returned to its original red and green. After the Lines Brothers takeover, the colours switched to yellow and dark blue, with silver strips and some parts in black, and kept this basic scheme through the 1970s.

This category has the following 23 subcategories, out of 23 total.

The following 69 pages are in this category, out of 69 total.