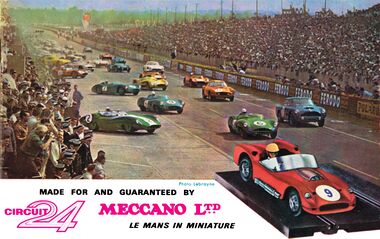 ~1963: front cover of the Circuit 24 manual, showing a photograph by Lebrayne of the real Le Mans circuit in action [image info] 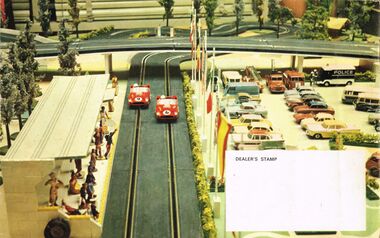 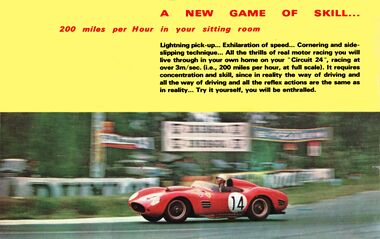 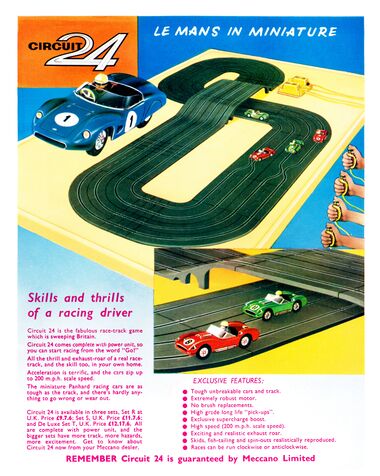 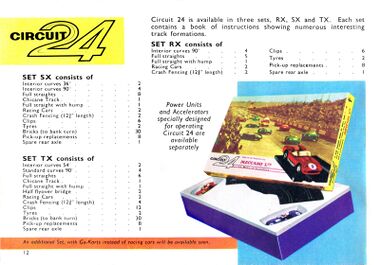 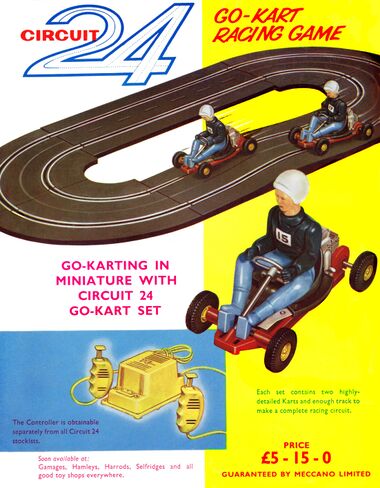 The Circuit 24 slot car racing game ("Le Mans in Miniature") was devised in 1961 by Etienne Jouët and sold in the UK by Meccano Ltd.

The "24" in the product name would probably have been understood by a French audience to be an obvious reference to the annual 24-hour race at Le Mans, but the reference would have been less obvious to buyers in Britain and other countries. In the UK, the Circuit 24 adverts in Meccano Magazine only ran from 1962 until 1964, by which time Meccano Ltd was facing bankruptcy.

Documentation of the scale of C24 is hard to come by: it's sometimes referred to as 1:32 (the nearest "sensible" scale), but a contemporary article in Meccano Magazine introducing the system (1962) said that it was designed to be 1:30 scale.

Would you like all the excitement of a real car race in your own home, the "roar" of the exhausts, the excitement of taking corners at speed, the immense satisfaction of seeing your car shoot ahead of its rival? All these thrills are contained in the new road racing game "Circuit 24" based on the world-famous event at Le Mans and now available from Meccano Dealers.

Road racing experts who have seen and tested this fine new indoor attraction are enthusiastic about the performance of the cars and the challenge to skill which "Circuit 24" presents. It comes to Britain after a remarkably successful debut on the Continent and will be made for British enthusiasts in three sets, details of which are advertised on the inside front cover of this month's M.M..

Included in the price of each set is the power control unit necessary for operating the sturdily-built, brightly-coloured racing cars and three types of car will eventually be available, all built to 1/30 scale. In the actual sets will be D.B. Panhards, but as an alternative Ferrari cars may be purchased separately. There are also plans for a Competition Ferrari Car which drivers will be able to "tune" and which will be capable of a maximum scale speed of over 300 miles an hour.

Power units have been specially designed for use with "Circuit 24", and in all three sets speed is regulated by hand throttles or accelerators which give special booster control for maximum speed.

In each case a considerable measure of control can be obtained after a little practice. In "Circuit 24", as in everything else, practice makes perfect.

The circuit itself consists of a variety of track sections which fit together with remarkable ease so that assembly is no problem. Once joined neither the vibration set up by the running of the cars nor the inherent stresses of the track can dislodge the units. All three sets contain straight and curved sections and one full straight with hump. In the two bigger sets is a breathtaking chicane which is a supreme test of a driver's skill. The biggest set also includes an exciting fly-over bridge. In the two largest sets are bricks which fit beneath the track so that curves can be banked in realistic fashion and it will be found that these bricks have other uses also around the track.

The circuit operates at 24 volts A.C. (full boost) and at 20 volts (normal speed). In all sets the cars provided will be matched for speed so that the operator's control will be the deciding factor. All the conditions are there to bring about the fantastic thrills of a real road event, and spins and skids are part of the challenge that lies ahead of the "Circuit 24" enthusiast.

The cars themselves vary a little in characteristics. For instance, the Panhard will be quieter than the Ferrari when running, but on acceleration a realistically designed "exhaust" note will be audible.

Accessories and additional track will be available so that extensive layouts can quickly be built up and provision has been made for track to be screwed to a baseboard if required.

"Circuit 24" sets, packed in attractive boxes which carry a scene in vivid colour based on the Le Mans circuit itself, are now available and full details of the items included in each outfit can be obtained from any Meccano dealer.

One final word – a 24-page Book of Instructions in each set gives the owner all necessary information about track assembly, car maintenance, etc. The book also sets out general rules for racing which will be welcomed by all enthusiasts, although probably every home will have its own particular way of conducting races in which all members of the family can well take part.

"Circuit 24" is of special interest not only because it incorporates a number of novel features but also because, though marketed by the long-established British firm of Meccano, it is, in fact, produced in France. Next year it will be manufactured in England. The equipment has enjoyed considerable popularity in France, where it has been selling to the extent, we understand, of some 2,00 units weekly. ...

THE WORLD'S MOST EXCITING RACING GAME

Circuit 24 – Le Mans in Miniature – is voted the most thrilling racing game ever played. It offers boys – and their dads – all the excitement of a real car race in their own home.

The racing cars in Circuit 24 accelerate faster than any other make of model car. Their power-packed engines roar up to scale speeds of 200 m.p.h. The materials used are of the same high quality as for space rockets, e.g. high-tensile molybdenum steel, stainless 18/8, Delrin high impact nylon, etc.

For real racing thrills, the two cars in each set have been carefully matched for performance and can't steal current from each other. Each is a potential winner; it is the skill of the driver which determines the race.

Circuit 24 Track is the quickest to assemble. In just a few minutes it is ready for racing! With Circuit 24 track components, it is possible to make a wide variety of racing circuits.

The knack of control with the super-sensitive hand controllers is acquired very quickly ... then daring handling produces lap speeds to leave the others standing! The reflex actions and the manner of driving are the same as in reality – requiring concentration and skill.

Circuit 24 racing cars can be operated only by Circuit 24 Power Units and Accelerators, which your local dealer can supply.

from an early catalogue

"Accessories to be introduced later:"

Le Mans has been running since 1923, and is reckoned to be the world's oldest endurance sports-car race. The city of Le Mans is inland, in the North-East of the Pays de la Loire region (and is roughly in the middle of France's North-West quadrant).

One Saturday Next June, at precisely 16.00 hours, everybody who is anybody in the world of cars has a date with this enthralling moment when the 50 or 60 drivers taking part are unleashed.

The excitement of the spectators scattered over 13,461 km of the course will be at its height. When the cars flash by for the first time it will reach a peak from which it will not fall until after several laps when everyone has become accustomed to the thrill.

But, in the pits and amongst the officials, the start will only mark the beginning of their anguish. For the organisers, this Festival of the Car will have meant a year's continuous hard work. During each second that passes, the sum of all this effort will hang in the balance.

But this great struggle is of interest to everybody, for it is the veritable bench-test of the car.

The intense strictness of the rules is equalled only by the severity with which they are applied.