The Dublo model had a Ring Field motor and was assigned the catalogue number 2234 (or 3234 for the three-rail version). 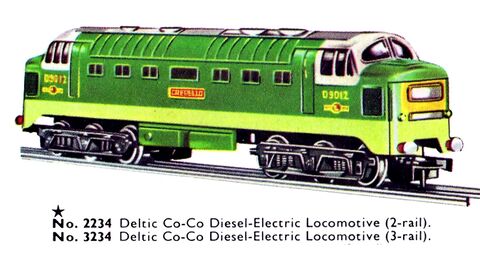 The "Deltic" diesel engine design used a radical variation on the usual system of having a single piston in a closed-ended cylinder. In the Deltic system, each cylinder has a piston at both ends, sharing the same chamber and moving out of phase. The double-ended cylinders are then arranged to form a triangle (a "delta"), with two cylinder rods meeting at each corner, connected to a driveshaft.

One of the original motivations for the "Deltic" design was its "flat triangle" profile. Conventional engine configurations with single-ended pistons arrangled around a central driveshaft produced heavy, "blocky" engines that were sometimes awkward to install -- a conventional six-cylinder engine needs all six cylinders to be lined up in a row. By contrast, the more "distributed" Deltic configuration allowed six cylinders to be arranged around a common centre in a comparatively flat space, such as an aircraft wing.

In practice, Deltics found their main application in marine engines, where the "flat" shape of a single Deltic unit allowed multiple sections to be stacked to produce compact multilayer engines of arbitrary power. The configuration of "stacked deltas" also worked for building extremely powerful diesel locomotives, where a maximum amount of power-generation needed to be fitted into a space that was tightly constrained.

Just over twenty Class 55's (D9000-D9021) were built in 1961-62, manufactured by English Electric, with a pair of Napier Deltic engines per locomotive. The Class 55's were used on high-speed routes before the introduction of the InterCity 125 in the late 1970's.

D9012 "Crepello" was named after the racehorse that won the Epsom Derby in 1957.