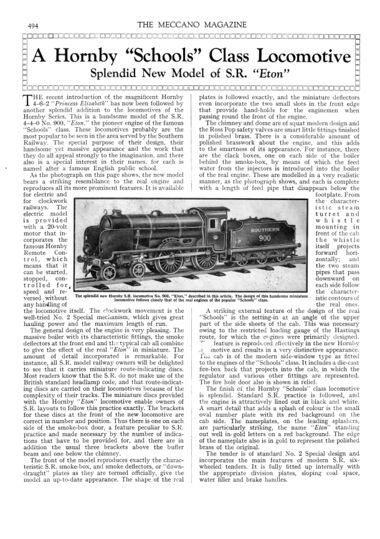 Article in Meccano Magazine on the launch of the model, 1937

This loco is on the 1930's gauge 0 layout, coupled to a rake of seven brown-and-cream No 2 Special Pullman coaches.

The catalogue number breaks down into "Electric, No.4, 20V". The clockwork version is listed as a No.4C (No.4, Clockwork).

However, there weren't any other Hornby "E420" locomotives, the Eton being a one-off. At this point it was starting to become clear that although Hornby's No.0, 1, 2 ... numbering system had been workable when the company was producing generic designs with different paintwork (where, for instance, all contemporary "No.1" locos were physically identical apart from their colour and numbering), this system started to break down once the locomotives started to become proper models, individually designed to correspond to their original locos.

Hornby's range of individually tailored "No.2 Special" locos were certainly based on the same basic design, but now had different physical detailing, and for the "Princess Elizabeth", Hornby gave up and didn't bother trying to invent a number classification for what was very much a one-off model. 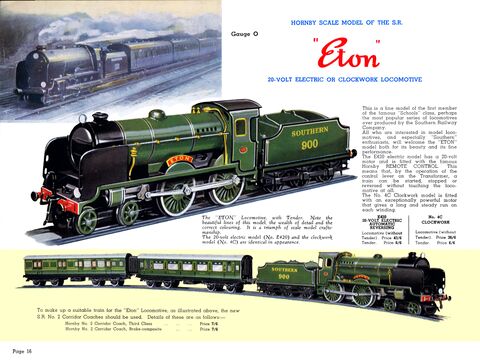 The forty Southern Railway "V Class", or "Schools Class" locomotives were designed by Richard Maunsell and built at Eastleigh between 1930 and 1934. Derived from the 4-6-0 Lord Nelson class, the more compact Schools Class could fit onto shorter turntables, and its round boiler allowed the locomotive to be certified for use in smaller tunnels.

The series were originally numbered 900-939 and were named after famous public schools, with 900 Eton being the first.

925 Cheltenham is on display at the National Railway Museum.