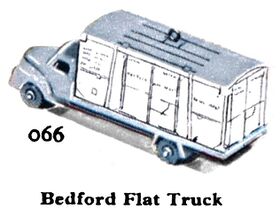 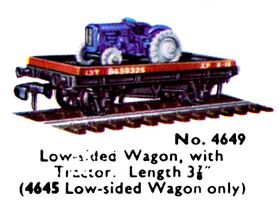 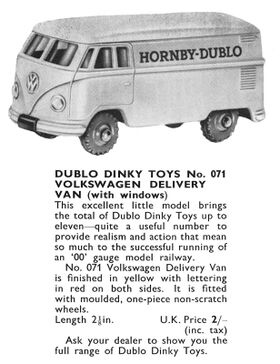 The Dublo Dinky Toys range was announced by Meccano Ltd. in late 1957, and appeared in the shops in 1958. The range was designed to 1:76 scale to work with 00-gauge Hornby Dublo railways, just as the main, larger Dinky Toys range had been (mostly) designed to be compatible with the larger gauge 0 Hornby Trains.

The Dublo Dinky range didn't really catch the public's imagination in the same way as the original-size Dinkies, which were so popular in their own right as play toys that a lot of owners probably never realised that the range had originally been designed to work with gauge 0 model railways. The Dublo-sized vehicles, however, were just a bit too small to make really satisfying playtoys, and probably only really sold as set dressing for 00-gauge model railway layouts. With a restricted range of vehicles, and with some of the cars only being listed in the catalogues for a year or two before being discontinued (and the Dublo brand being discontinued in the 1960s after the takeover of Meccano Ltd. by Lines Brothers), the range is comparatively obscure, although some of the pieces did live on in the Dinky range for some years after the official demise of Dublo.

Due to their small size, the Dublo Dinkies tended to have fairly simple diecast bodies and simple wheels, although newer models did start having plastic windows in 1959 with the introduction of the Royal Mail Van. 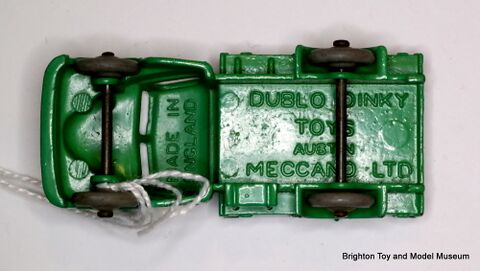 Here are the first of an entirely new series of Dinky Toys made to the scale of "00" gauge railways. These are produced with all the care and skill that have established the world-wide reputation of the larger scale Dinky Toys. They are precision die-cast in metal, fitted with one-piece non-scratch moulded wheels and tyres, and finished in attractive colours. Only perfectly safe LEAD FREE enamels are used for these toys as for all other Meccano products.

As well as the obvious ability of the "Dublo Dinky" cars to be parked alongside a station or by a level crossing, and of the figures to be sprinkled around a station set, the Bedford flatbed truck (066) was exactly the right size to carry take the same removable container(s) that fitted the Dublo low-sided railway wagons, which meant that the goods platform could be posed with its crane loading and unloading the containers road-to-rail, or rail-to-road. The ubiquitous low-sided wagon 4645 was also sold with a Dinky Dublo tractor as its load (as 4649), and could also be used as a car transporter.

Meccano Ltd. didn't produce very many different types of Dublo Dinky vehicles, as the small size made them look less impressive than the full-size Dinkies - their main purpose remained as "set dressing" for Dublo layouts, with people, a limited number of cars and commercial vehicles (to be parked outside a station or placed near level crossings or trackside roads), and a tractor.

The "miniature figures" were sometimes listed as Dublo Dinky, and sometimes just as Dinky Toys, and the brown and white containers with the top eyelet for crane lifting, which could have legitimately been listed as either Dublo or Dinky Dublo seem to have been presented just as Hornby Dublo products (perhaps because two out of the three items they could be used with – the crane and the wagon – were "core" Dublo pieces).

Due to the extremely short lifespan of a few of the vehicles, there might well not be a single official Meccano Ltd. listing that shows the full range, but due to the small number of items in the range, it's not too difficult to piece a listing together. "Gaps" in the list were presumably numbers that were reserved for future products, or that had been earmarked for products that never appeared.

The Dublo Dinky range never really grew very large, and judging by their comparative rarity, they can't have made too many of them.

Given the searing sucess that Mattel's Hotwheels later had with small diecast cars, this would seems to have been a great missed opportunity for Meccano Limited: the range does not really seem to have been be designed to be played with (except in the context of model railways), and seem instead to have been intended to be placed carefully on an 00-gauge model railway layout's roads and alongside station buildings. If they'd been meant to have individual play value, one might have expected a range based on very cool and desirable cars, such as supercars, classic cars and racecars (the Hotwheels range used hotrods). Instead, thirteen out of the range of fifteen were commercial vehicles, like delivery trucks and a Post Office van. There was one open-top sports car (a Singer Roadster), and one family car, a Ford Prefect.

If someone at Meccano Ltd. had instead tried playing with the small cars as stand-alone toys, they might have realised that what the user would really want to do was to skid them over the floor, at which point, Meccano Ltd. would have had the chance to be the company that invented low-friction "whizzy" wheels instead of Mattel. Instead of grudgingly producing a small range af small vehicles to placate model railway enthusiasts, and then not selling many of them, they could have been ahead of Corgi and Mattel.