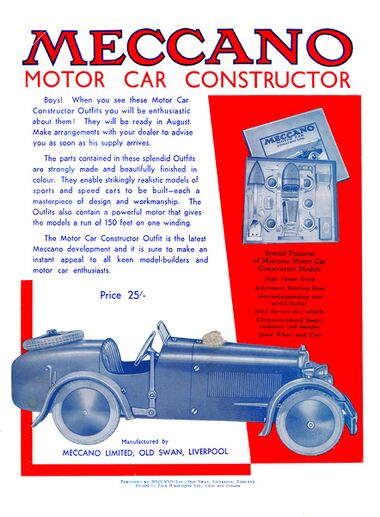 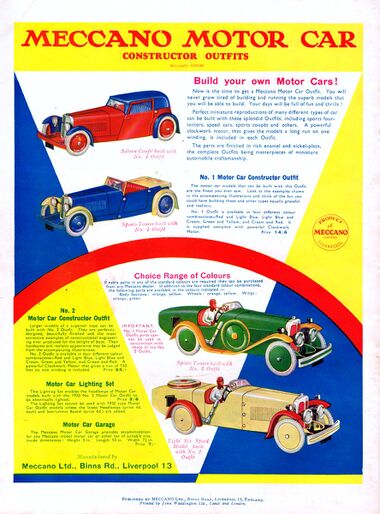 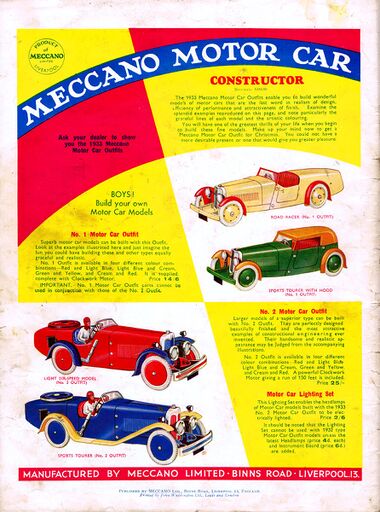 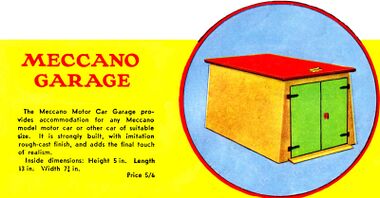 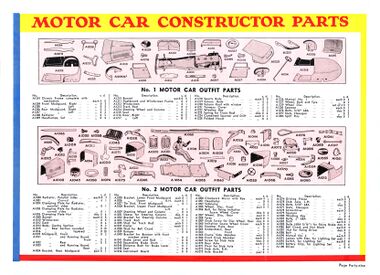 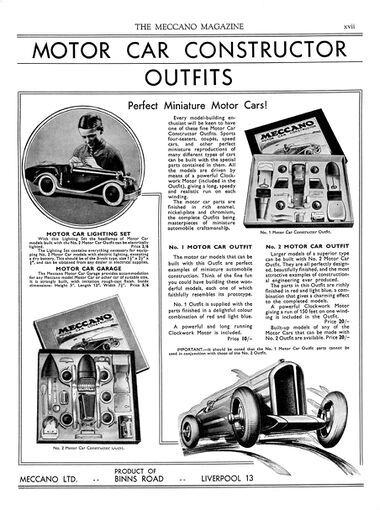 The Meccano Motor Car Constructor sets started to appear in 1932, as a followup to the successful Meccano Aeroplane Constructor outfits the previous year.

Meccano Ltd understood that although Meccano was successful, it wasn't for everyone. Some people wanted to build model cars, but didn't didn't necessarily want the results to look like Meccano models. While Meccano tried to be logically faithful to the original objects, the results were always primarily Meccano models, and there was also an argument that although Meccano was perfect for building scaffolded structures such as cranes, and nuts and bolts items like mechanisms and machines, that perhaps it wasn't so faithful in an engineering sense for building model motorcars, where the originals invested much of their character in smooth streamlined body panels.

Like the "Aeroplane" sets, the Motor Car sets consisted mostly of custom parts (that allowed a range of car variations), and again, like the aeroplane sets, the smaller outfits weren't compatible with the larger ones. There wasn't always a huge variation between some of the smaller models, and sometimes the biggest visible difference was whether a spare wheel was attached to the rear of the side.

Outfit No.1 and Outfit No.2 were not compatible - No.2 produced larger cars (and cost around twice as much).

The "MCC" models could also be ordered from the factory, pre-built. For the No.1 kit, the prebuilt variations on offer were:

In 1933, Meccano went a stage further, and produced a dedicated "non-constructor" model car, the Meccano Two-Seater Sports Car. This was similar in size but did away with the home-construction element, and was a conventional metal clockwork model with no assembly required. However, it was often advertised alongside the "constructor" outfits.

A wiring kit with tiny headlight bulbs that could be fitted inside an MCC car, and powered by a 3 Volt battery.

" The Meccano Motor Car Garage provides accomodation for any Meccano model motor car or any other car of suitable size. It is strongly built, with imitation rough-cast finish, and adds the final touch of realism.