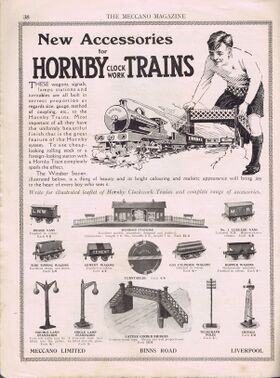 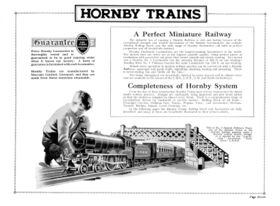 This example is identifiable as the earliest version of the bridge, since it's four upright posts are wooden (unlike later examples).

It was also the only "constructional" trackside accessory that Hornby made. Its pieces could be unbolted and reassembled, but since there weren't any other constructional railway accessories that it could exchange parts with, the constructional possibilities were limited to adding Meccano parts, adding home-made parts (such as right-angled adaptors to turn the steps through 90 degrees) or combining parts from multiple bridges to create longer spans.

Some later Hornby accessories retained some element of customisability -- some footbridges with signals allowed the signals to be moved or removed -- but by the time that further accessories appeared it was becoming clear that the original concept of a model railway where every piece was disassemblable and parts-swappable wasn't a particularly strong selling point. In theory, one could manufacture signals whose ladders and bases were swappable, but this would make them more expensive to manufacture, and in practice, customers wanting multiple signals and trackside parts probably preferred to buy what they wanted, ready-made, at cheaper prices.

The bridge has a screw-together construction, with two high square cross-section wooden supports and two smaller flanking buttress uprights at each end, painted in drab olive green and topped. These are screwed to a bridge sidewall-and-buttress made from a single sheet of bent red-painted metal, with the side facing the train printed with a brick pattern in drab olive green.

The bridge section is made of three white folded "Meccano-like" plates. The central piece is a simple flat walkway with Meccano latticework sides folded up at 90 degrees as sidewalls, and the two endpieces are similar white Meccano-like pieces with folded lattice sidewalls, but with angled steps cut and pressed into the walkway section. 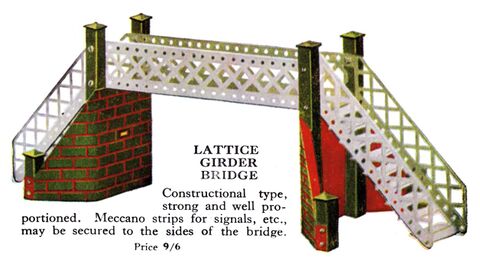