From The Brighton Toy and Model Index
(Redirected from Triang)
Jump to:navigation, search 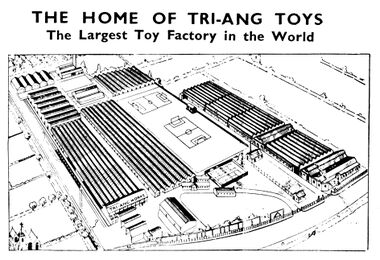 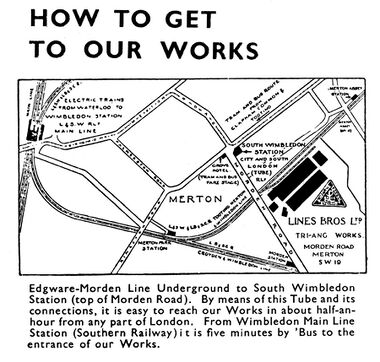 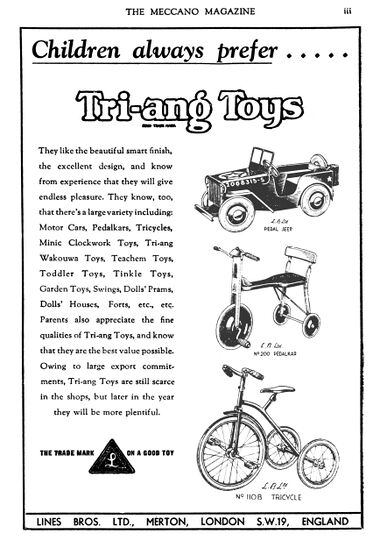 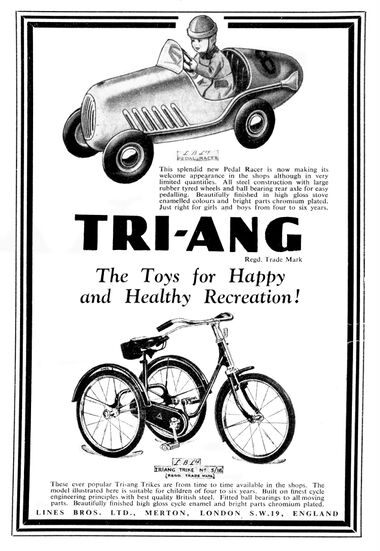 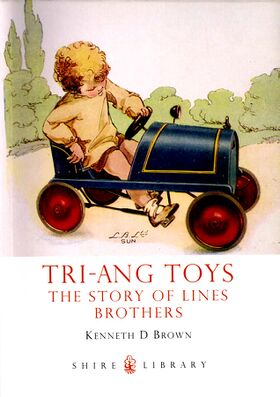 The toymaking company Lines Brothers was founded by the brothers Walter, William and Arthur Lines when they returned to civilian life after WW1. The company used Tri-Ang as a brandname, since a triangle is made of three lines.

Lines Brothers became a behemoth of a company, at one time claimed to be the largest toy company on the World, and even absorbing Meccano Ltd. However, the traditional "Big Toy Company" business model began to become less reliable through the 1960s, and Lines Brothers Limited called in the administrators in ~1971.

Toymaking had been something of a family tradition for the brothers - their father was Joseph Lines, who ran the toymaking company G&J Lines (1876-1930) with his brother George Lines, and the family had started making toys and models back in ~1850.

G&J's business had been wood-based, with a speciality being wooden horses in various scales, right up to full-size models used in shops to sell saddlery - looking for new markets for their wooden horses, G&J Lines had been successful in promoting the rocking-horse. However, while G&J were focused on traditional wooden toys (with some wheeled items), the brothers seemed impatient to move forwards into new markets. This was probably especially true of Walter Lines, who had shown real talent for almost everything to do with the industry, from toy design to factory layout. Walther is credited with having invented the scooter while at G&J, but been unable to persuade the company to put it into production. G&J did make wheeled items such as horse tricycles (a wooden horse with the mechanics of a tricycle embedded in it), but the idea that children might enjoy riding wheeled vehicles that didn't look like animals seems not to have struck G&J as sound or desirable.

Matters seem to have come to a head when the brothers returned from their service in World War One, where they'd have seen how early mechanisation was going to make horses obsolete on the battlefield. The comparison between the battlefield and the toy industry probably wasn't lost on them, and after a showdown with G&J, the brothers started their own toy company, Lines Brothers Limited, with Walter doing the initial toy design work.

LBL absorbed the products of G&J Lines after their father Joseph died in 1931.

While the Tri-ang brand had multiple sub-brands based around factories with their own particular products (such as International Model Aircraft, and Tri-ang Railways, the "heart" of the company always seemed to be the products descended from the G&J Lines range – when asked what they associate with the name Tri-ang, the company's main emotional impact on people's lives growing up seems to have been created by the pedalcars and tricycles, and perhaps (if parental income allowed it) memories of a Tri-ang dollhouse or rocking-horse in the nursery.

The brothers set up their Triang Works in Morden Road, London SW10, billed as "The largest Toy Factory in the World", and designed by Walter.

The Merton site had its own railway siding, and, in the centre of the factory site, it's own football field, which also came in handy as a space for testing out the model aircraft produced by the brothers' "International Model Aircraft" company, which was on-site.

As the business boomed, Lines Brothers were keen to continue entering new market sectors, and avoid the more blinkered example of G&J. Not committed to any particular approach to toymaking, Walter embarked on a programme of acquisitions – where other companies might tentatively make partnerships with outside companies, Walter would simply buy them outright. Walter was a fan of vertical integration – Lines Brothers used a lot of paint, so they bought a paint company. They used a lot of paper, so they bought a paper company, and forestry to grow their own trees.

When the London toy shop Hamleys went into receivership, Walter polled other toy manufacturers about what their attitude might be if LBL acquired the shop but continued to run it semi-independently ... after which Walter also had the country's biggest toyshop.

LBL's agnostic approach to materials and technologies made it easier for them to avoid getting stuck in a rut. They bought Rovex, a small plastics moulding company in Richmond, and set them up with a new factory site in Margate, making plastic-bodies model railways as Triang Railways.

The company's Spot-On range were made at a new factory in Castleereagh, Northern Ireland.

Overall, Lines Brothers at their peak were supposed to own over fifty companies in the UK and abroad, including manufacturing and assembly in Australia and Canada ("Thistle Toys").

Although the Triang brand was a brilliantly clever bit of marketing, the Lines Brothers approach to market branding was slightly haphazard, and coupled with their enthusiasm for taking over and founding new companies, a product might have as many as four different brandnames plastered over it. The "Penguin" Boats produced by International Model Aircraft (a subsidiary of Lines Brothers) were branded Lines Brothers, and Triang, and IMA and International Model Aircraft ... and FROG (Flies Right Off Ground, IMA's brand originally created for model aircraft ... and since the boats didn't fly, they were also branded Penguin, IMA's sub-brand of FROG for non-flying products.

The extent to which the brothers' enthusiasm for playing with branding wasn't matched by branding discipline was also apparent in the name Tri-ang ... more specifically, in the way that the company couldn't decide how the name was supposed to be written. Although the spelling appeared to be constant, adverts used almost every combination of capitalisation: TRI-ANG, Tri-ang, and Tri-Ang, and the brothers had even initially presented the brand as "Triang Tois" (with an "i" instead of a "y"). Luckily, the customers didn't seem to care.

With the takeover of Meccano Ltd in the mid-1960s, Triang also acquired Dinky, Meccano and Hornby (with Triang Railways rebranding as "Triang Hornby").

Lines Brothers in the 1960s - the final decade

The Sixties were a difficult time for the British toy industry, with domestic companies struggling to compete with imported toys from the US and Japan. When Meccano Ltd. went bust in the mid-1960s, Lines Brothers acquired them and integrated most of the products into their lineup, but by this time, some of the factors that had been damaging Meccano Ltd were also having an impact on LBL. Although LBL had done their best to move with the times, sturdy metal and wooden toys bought through toyshops with decent profit margins were being increasingly replaced with cheap mass-produced plastic, with the diecast car market increasingly dominated by cheaper imports from the likes of Mattell, and far eastern manufacturing taking over much of what had once been the "penny toys" sector. US toy companies were now often owned by large conglomerates with deep pockets like Quaker Oats and General Mills who wanted to diversify, and if their heavily-promoted product lines failed to create a long-term market, then by that time those companies were sold on, their competitors had already been damaged.

It was a time of buyouts and rationalisations and venture capital acquisitions, and Lines Brothers finally succumbed in ~1971, and was broken up.

This category has the following 55 subcategories, out of 55 total.