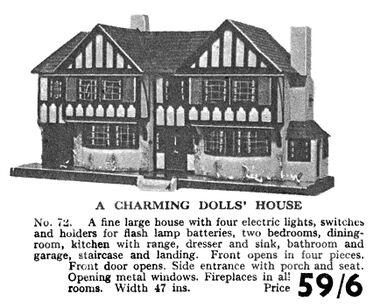 As a young child growing up in the 60s, I had always dreamed of having a dolls house. I never did own one and always felt that I had missed out.

Fast-forward 50 years and a friend of mine happened to mention that her cousin was moving house and had a dolls house that she wanted to dispose of. Of course I was interested and immediately had visions of making tiny curtains and cushions and tracking down interesting bits of miniature furniture and fittings. The reality, when I finally got to see it, was a very sad house that had been used as a bed for the cats. The good part was that I recognised it as a Tri-ang dolls house from the 1950’s. In fact it was the "Stockbroker" executive house. Double fronted with garage! Surely this would be worth saving. 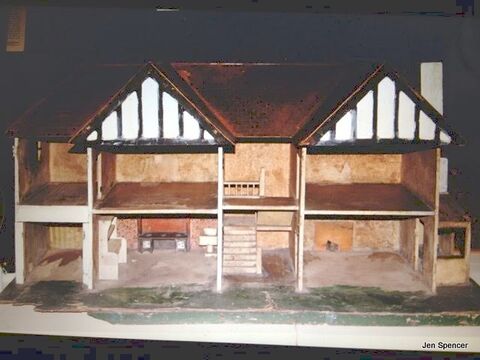 Work started on the strip-out.

The house required a new roof which was constructed from sheet roof tiles from The Dollshouse Shop in Steyning which were then painted dark grey. Some of the window frames were missing and copies were made in plastic and acrylic. Finally, we replaced the original shutters and added some missing ones. The exterior was now taking shape and just needed a paint job to restore the frontage to its original splendid "Stockbroker" status.

The outside of the house had a repaint and a new plinth was made. Modern exterior doors were added to give a "contemporary" look to the exterior. 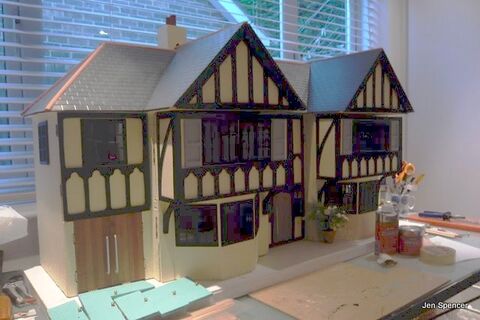 Work has now started on the interiors. The scale is 1/16th for furnishings and fittings. This is a relatively difficult scale to find originals. Spot-On did this scale in the 1960s. My original idea was to create a modern contemporary interior but finding interesting "modern style" furniture in the correct scale is very difficult.

Work on the interiors continues.