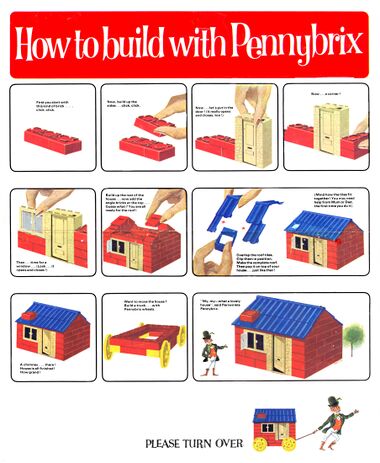 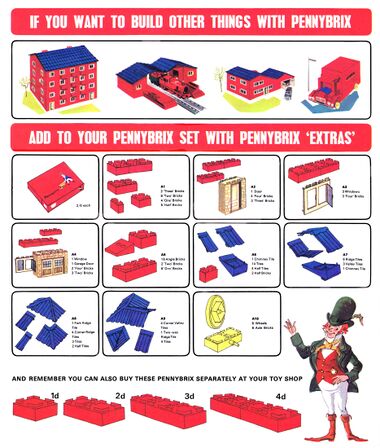 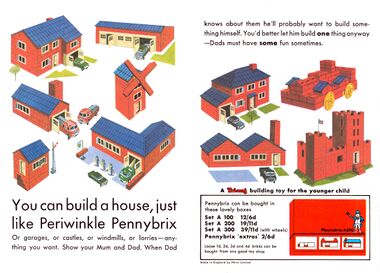 1960s: "You can build a house, just like Periwinkle Pennybrix" [image info] 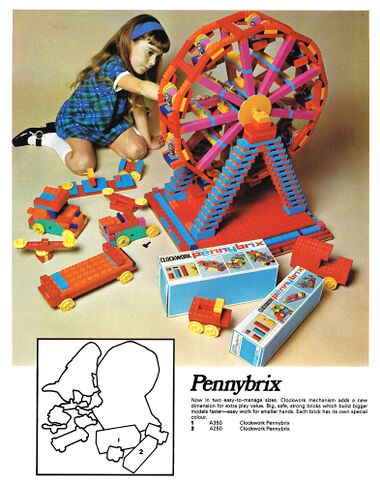 The Pennybrix plastic bricks system was introduced by Tri-ang in around 1964, as an attempt to produce a more "Lego-like" system.

Aimed at younger children, the four most basic individual Pennybrix pieces were available from toyshops separately, with a standard "one unit" piece – the counterpart of a square Lego "four by four" brick – costing exactly one penny (the others costing 2d, 3d and 4d for the 2,3, and four-unit bricks).

In order to make the Pennybrix system more attractive to children, Tri-ang invented the Periwinkle Pennybrix character, who was supposed to live in a house built using Pennybrix.

Periwinkle had white trousers, yellow boots, a red waistcoat, blue jacket and blue top hat with a feather, and Periwinkle figures were included in some of the sets.

The instruction leaflet for how to use Pennybrix was called "Periwinkle Builds a House", and was illustrated in colour like a children's book, so that children could engage with the character and identify with Periwinkle building his house.

Toward the end of the product range's life, Periwinkle was joined by a second character, Mortimer Mole.

Pennybricks were functionally similar to Lego bricks, with a hollow base and normally four or eight protrusions on the top surface to allow them to be clipped together, either as a column or with staggered offsets, just like Lego. The main difference with Pennybrix was that instead of four protruding "pegs", the bricks had four L-shaped protrusions towards the corners, which did roughly the same job.

Given the simplicity of the main bricks, the roof pieces were surprisingly sophisticated, with corrugated push-together tiles and half-tiles, spine tiles, joint pieces and concave "valley" angle tiles to allow roof sections that intersected at 90 degrees.

Main bricks were red, corrugated push-together roof tiles were blue, doorways and windows were tan stone-coloured, and wheels and axle blocks were yellow.

At some point these seem to have been joined by a Periwinkle Road and Railway Set, with a red locomotive and clip-together track with channels for the wheels to run in.

By the time of the 1970 Rovex Triang trade catalogue, the range seems to have been simplified to two "Clockwork Pennybrix" sets.