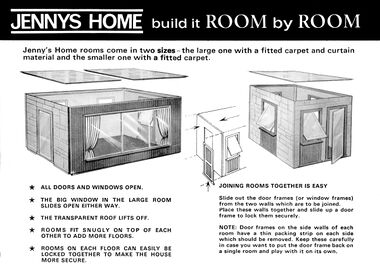 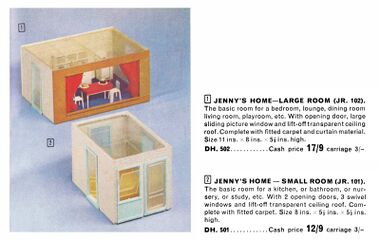 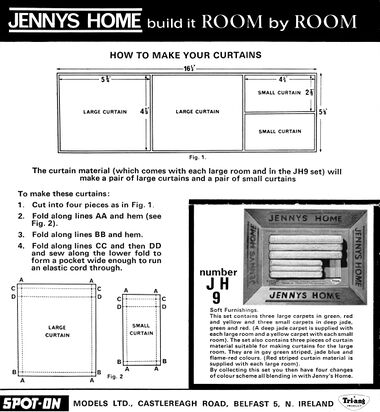 The Jenny's Home dollhouse room system (Jenny's Room) consisted of two different rooms: the Large Room JR102 and the Small Room JR101, the larger room being somewhat shoebox-sized, and the smaller one being the same height and depth, but half the width. Not released with the original Spot-On range (whose early catalogue showed the furniture being played with in front of a more conventional dollhouse), the Jenny's Rooms were originally packaged in slightly utilitarian carboard boxes that announced that they were Spot-On products, made in Castlereagh, Belfast, and later on, that they were made by Rovex.

Door frames (with door) are a standard size, and fit into a rectangular cutouts in the walls, which extended all the way down to the base. Door frames have overlapping flanges around the upper three sides that overlap the wall on both sides, and slot into the walls via the gap at the base.

Window frames come with a section of lower wall, making up a flange-edged rectangle of exactly the same size as a door frame.

Window frames and door frames are therefore interchangeable, allowing a defgree of imemdiate customisation. Where the exterior wall of a small room has a doorway and a window next to each other on one of the walls, this can easily be changed to two windows.

While the rooms can be placed alongside each other, the system also includes the ability to lock combinations of rooms together.

While the door and window frame pieces have a groove around three edges to accommodate a wall, this groove is actually twice as wide as it needs to be, with the slack taken up by little plastic rod-shaped shims that are wedged into place at the factory.

If two rooms are to be connected together, the doors and windows are removed, the little plastic shims put somewhere safe, the empty gaps aligned, and a door or window piece slid up from the base to securely lock the two rooms together. This allows two of more room to be rigidly connected with interconnecting doors or window-hatches to create a larger two-dimensional layout.

This distinctive method of locking adjacent rooms together using doorframes slid up from below reminds us of an earlier system from around ~1932/1933 which we think may have been suggested as the basis of a similar room-based system meant for the Bassett-Lowle Nuways dollhouse furniture range, but which never seems to have gone into production. The B-L system seems ot have been the "pet project" of Wenman Joseph Bassett-Lowke himself, as “WJ” liked to keep up-to-date with modern architectural trends (“Nuways” was designed after his own modernist Behrens-designed house), and the idea of replacing the traditional dollhouse with a modular room-based system that could better replace the spaces that people actually lived in (not everyone lives in a two-up, two-down house with a steep roof and a chimney) would have appealed.

Since the Jenny’s Home room system is plastered with references to "Homes and Gardens" magazine, who get a high-profile “produced in conjunction with” credit on all the room-box packaging and publicity materials … and Homes and Gardens were around in 1932 … we can’t help wondering whether someone at H&G may have originally designed the system, and thought that it would be used by Bassett-Lowke in the 1930s, and eventually found a production partner in the shape of Lines Brothers to resurrect the idea thirty-odd years later.

If so, the Tri-ang Jenny’s Home room box system may be considered as a "ghost" of a never-produced Bassett-Lowke Nuways product.