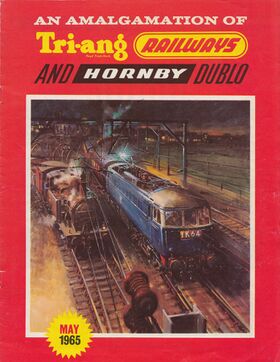 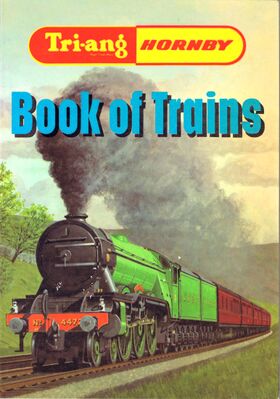 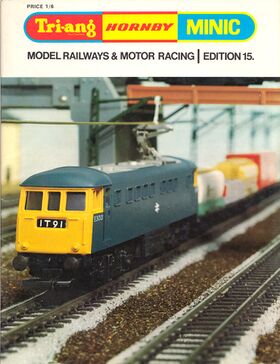 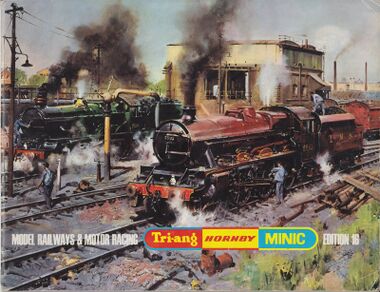 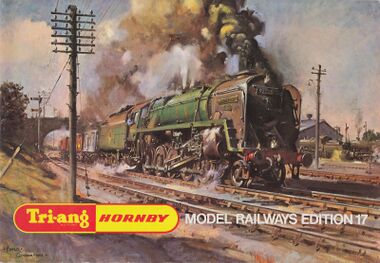 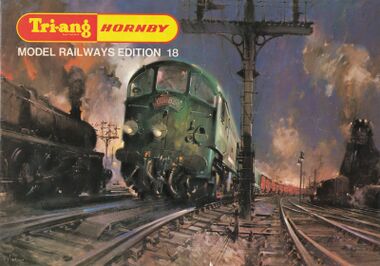 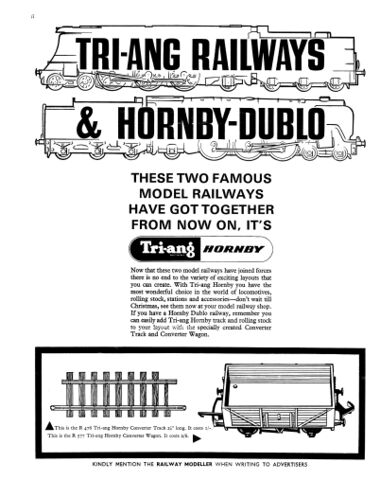 Tri-ang Hornby, and adaptor wagons and track, advert from the inside front cover of Railway Modeller, October 1965. although the advert says that "these two model railways have joined forces", in effect, the purpose of the adaptor pieces was to allow Triang to sell the existing Dublo legacy stockpile alongside their Triang range without labelling it as obsolete, and to help existing Dublo users to make the transition to being Triang customers. [image info]

Triang Hornby was the model railway range that resulted from the Lines Brothers' takeover of Meccano Ltd. in the mid-1960s.

The end of Hornby Dublo

Meccano Ltd's Hornby Dublo range was expensive and losing money, and it's rumoured that production had already shut down some time before Lines Brothers took over, due to the amount of unsold stockpiled production that had been building up in the warehouse space.

Lines Brothers already had a model railway line - Triang Railways - based on the plastic model railway range produced by their Rovex Plastics subsidiary. The Triang Railways range was a lot cheaper to make than the expensive diecast Dublo range, and although Meccano Ltd had started producing some plastic-bodied wagons, it didn't seem to make financial sense to retool and redesign the Dublo range for plastic when Lines Brothers already had a plastic-moulded railway range that was already in production.

The obvious solution was to announce the merger of the two ranges, as Tri-ang Hornby.

In practice, "Tri-ang Hornby" was the Rovex-based "Tri-ang Railways" range under a fresh name, and was Hornby in name only - some Hornby items survived in the new range (like trackside buildings), but generally, once the existing Dublo stocks were sold, that was it. Although Dublo owners were reassured that the move didn't mean that Dublo was going to be scrapped, in effect it already had been.

I’d spent the previous ten years as Marketing Director of Lines Brothers running Hornby into the ground and then we acquired Meccano and they made me Chairman of Meccano (laughs) so I said to myself am I going to spend a lot more time trying to resuscitate it? So I decided that was ridiculous, but the one thing about Hornby which was internationally known and respected was the name – Hornby, and so we transferred the name to Tri-ang Railways and it became Tri-ang Hornby and we threw out the merchandise so, in fact what you see now under Hornby has no relationship at all to the Hornby product originally it’s entirely Tri-ang Railways but it’s called Hornby.

As part of the announced merger of the two ranges, Triang did produce adaptor wagons and adaptor track (1965) that allowed the two systems to cooperate, but this was essentially a move to help existing Dublo owners migrate over to the Triang system, and new products then standardised on the use of the Triang couplings and Triang-compatible track connectors - Hornby track, and rolling stock with Hornby couplings, were now regarded as a "legacy" format.

Confusingly, at least some of the Dublo tooling was obtained by Wrenn (in which Lines Brothers owned a stake), and Wren started producing their own updated versions of some of the Dublo pieces. Wren then became officially part of the Lines Brothers empire as Tri-ang Wrenn, which led to the even more confusing situation that while Tri-ang Hornby was called "Hornby" (but wasn't), Triang Wrenn wasn't called "Hornby", but pretty much was.

Tri-ang Hornby (as a brand) falls outside the cutoff date that we try to apply to the Museum's display collections, of 1955.

Although we don't have a specific Tri-ang Hornby collection, we //do// have some of the nice Dublo pieces that ended up being incorporated into the early Tri-ang Hornby range, and some of the locomotives and rolling stock that we use and run on the museum's two 00-gauge model railways are Tri-ang Hornby.

A review of the contemporary Hornby catalogues shows a complicated sequence of company and branding changes, with a logo that gradually gets less and less like the Triang version

The release on an eight-page transitional brochure-catalogue, which explains the merger of the two ranges.

The new "Tri-ang Hornby" logo appears inside, but doesn't appear on the front cover, which shows both logos for the two previous ranges. There's a small Cuneo painting embedded in the front cover.

New products on the back page are a rocket launcher wagon and a satellite launcher, typical of the Tri-ang "novelty" range.

The first catalogue with the "Tri-ang Hornby" logo on the front cover (quite large, showing up well against a dark Cuneo cover. The not-that-successful "Wild West"-style US outline trains go.

The company seem to have decided to try to break with tradition, with a white background cover with a light-shaeded embedded painting, and the words "MODEL RAILWAYS" in bold and fairly generic magazine-style text, with the Tri-iang Hornby logo top left. The cover looks like a magazine format, with Triang Hornby as the publisher - was the company feeling a backlash? The 13th Edition text is small, perhaps because the company might not have wanted to stress any "unlucky" connotations.

The novelty range are adapted and re-launched as the "Battlespace" range.

The company are now trying to cash in on the 1960s "slot-car" craze.

Another whitish magazine format style cover! Now the publication looks as if it is something called "Railways & Motor Racing", with "MINIC" tacked onto the end of the Triang-Hornby badge, to give a rather ungainly "Tri-ang Hornby Minic" logo. The main picture is split diagonally between trains and racing cars, and the catalogue introduces a range of combined rail and road accessories that allow trains and cars to cross paths.

A reach back to the format of the old 1930s "Hornby Book of Trains", with a mixture of "encyclopaedia-style" train enthusiast content and product catalogue pages, but in portrait format.

A white header, now with "Tri-ang Hornby Minic" dominant, above "Model Railways & Motor Racing". Racing cars are now exiled from the front cover in favour fo a photograph of a very plastic-looking 00-gauge diesel. Not an inspiring cover.

"Made in Great Britain by ROVEX INDUSTRIES LTD."

After the grim 1969 cover, the company revert to using a Cuneo painting again, and switch to a landscape format more reminiscent fog the old 1930s Mecano Ltd Hornby catalogues. The Triang Hornby Minic logo is still being used, and the description is "Model Railways and Motor Racing".

The company is now listed as "ROVEX Tri-ang Ltd."

Trains are good! A specially-commissioned Cuneo painting of the Evening Star steam loco coincides with the launch of the new Evening Star model. This is how Meccano Ltd used to do things in the 1930s!

The catalogue title is now just "Model Railways", and "MINIC" has been dumped from the catalogue logo. The emphasis seems to be to go back to the traditional market, of models of classic steam engines.

The company is still given as ROVEX Tri-ang Ltd. ... but this year, Lines Brothers go into receivership.

A Cuneo diesel on the cover.

The company is still given as ROVEX Tri-ang Ltd., for the last time