A boxed clockwork plastic 14" model "Thames" Cabin Cruiser, with brown superstructure and a white hull and roof, made by Tri-ang in the 1960s, with as catalogue identification number 413 S. The boat was also sometimes promoted under the Scalex brand. 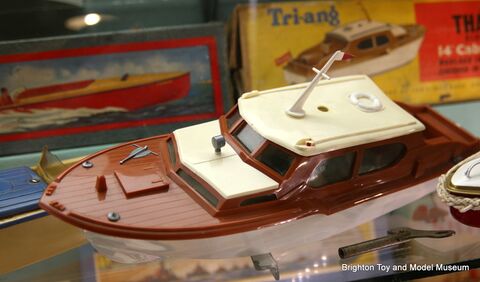 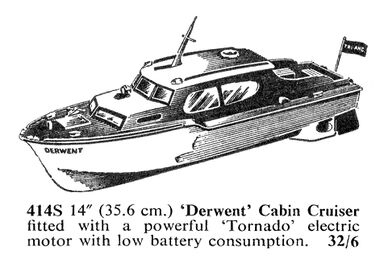 Triang had two model boats with identical-looking catalogue images, 413S "Thames" and 414S "Derwent", with Thames being available in clockwork or electric, and Derwent only available as an electric version. As far as we can tell, the Derwent differed from the electric version of the Thames by having brass fittings during at least part of its lifecycle. However, since the Thames was sometimes advertised only as a clockwork version, we're not sure if the Derwent always had metal fittings to distinguish it from the cheaper model.