Meccano Ltd.'s Dinky Toys range had practically owned the diecast model cars market in Britain since its launch in the 1930s, but Mettoy-Playcraft had launched a competing Corgi Toys range in 1956 and shown that it was possible to compete with Dinky if one had a more modern product range that made good use of improvements in diecasting to make more accurate and less stylised toys, and if one made use of the new plastics for extra features like moulded transparent windows.

By the 1950s, Triang's existing mostly-metal road vehicles ranges were a bit old – the company had originally been known for prams, bicycles and pedal-cars, and had introduced smaller sheet-metal cars, then miniaturised these to gauge 0 model railway scale with the rather lovely Tri-ang Minic range, but toy manufacturing and car design had both since moved on, and the switch to diecasting was probably an overdue development. Diecasting had come to dominate the toy car market, as it allowed makers to reproduce the complex curves and detailing of modern automobiles in a single simple process, to give a robust bodyshell that could easily be painted with an attractive high-gloss finish and assembled on a modern factory production-line.

Are built in a large modern plant in NORTHERN IRELAND. Here, under the most ideal conditions, a team of highly skilled DESIGNERS and PRODUCTION ENGINEERS, labour unceasingly to create for you, the most accurate, authentic and realistic models available today.

Each model is true to scale, 1/42nd of the size of the original vehicle, and built to the same high standard. Every perfect miniature, is a collector's item, and justly deserves pride of place in your collection. 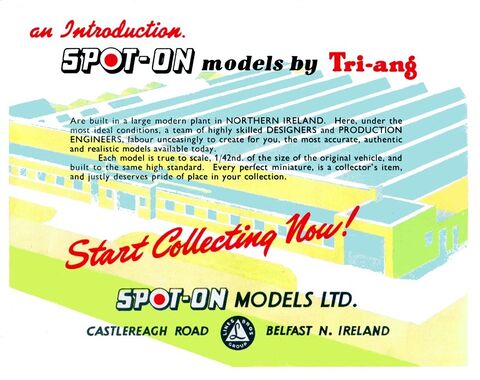 With two large UK companies already battling it out in the market, Triang's range would have to be somehow different to both Corgi Toys's and Dinky Toys's. Where Corgi had produced more accurate reproductions of vehicles than the older Dinkies, unhindered by the overengineering that had been required by Meccano Ltd in the early days of diecasting, Spot-On would go one stage better, and produce even more accurately scaled vehicles – the Spot-On range would be scaled to a fractionally larger 1:42 scaling rather than the nominal 1:43 of Dinky, and where Dinky and Corgi both pragmatically adopted a somewhat "flexible" attitude to scaling depending on the size of the original vehicles, Spot-On vehicles would ALL be produced to exactly the same 1:42 scale, regardless of how big or small the result then had to be (or how much it cost to make!). Their dimensions would always be exactly right, or "spot-on", as emphasised by the Spot-On logo being accompanied by an image of a pair of measuring dividers in the vehicles range – although the pieces were likely to be played with in much the same way as Dinky Toys or Corgi Toys, Spot-On didn't have "toys" in the product name ... these were presented as models.

Because of their consistent scaling, Spot-On's double-decker buses and large lorries were consequently a lot larger than their Dinky and Corgi counterparts, and the company seemed to go out of their way to highlight the (authentic) size differences between some of their models by also making a model of the Isetta bubble car, which was probably the smallest British-built mass-produced car they could find. 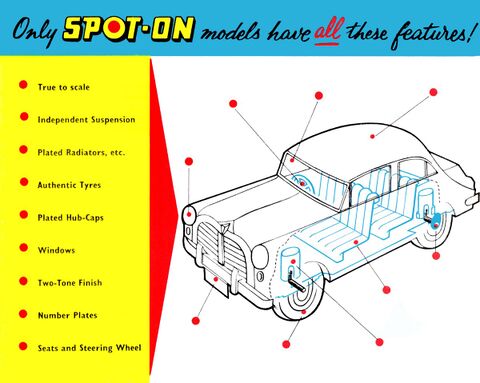 A further distinction was that in order to expand their ranges and their markets, both the Dinky and Corgi ranges tried to produce more foreign car designs that the UK market would find "exotic" - Dinky had the ability to "top up" their range by importing Continental-designed Dinky Toys made for the European market by Meccano France, and Corgi's Chief Designer Marcel van Cleemput made a point of dragging his design team around international motor shows to quickly measure up the latest new models from foreign car manufacturers. The Spot-On team seem to have decided that faced with the task of having to put together a whole new range of die-cast cars without the international contacts of their established competitors, that they wouldn't even try to produce foreign car models, and with a rare exception, the Spot-On range remained defiantly British. If it wasn't made it Britain, Spot-On wouldn't model it (the real versions of the aforementioned Isetta bubblecars were manufactured in Brighton, UK, at a site about five minutes walk from the toy museum, now named Isetta Square). 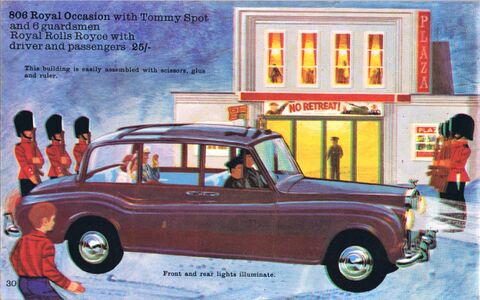