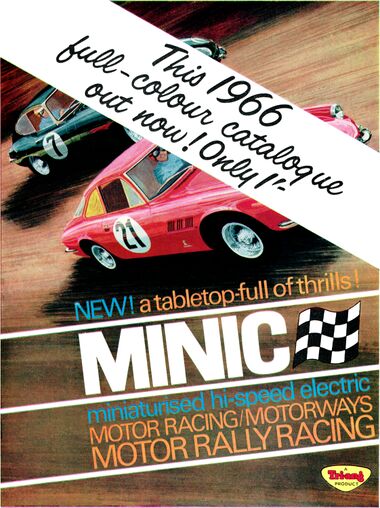 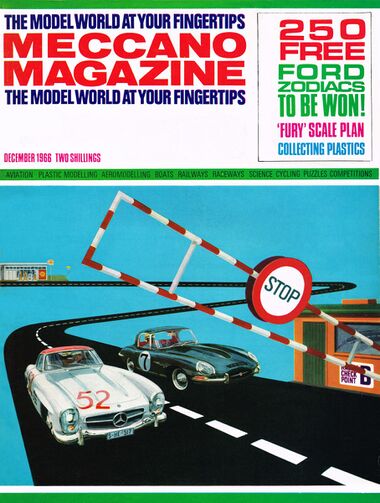 Minic Motor Racing and Minic Motor Rally Racing were sub-brands for the Minic Motorways slotcar system, which started being used after perhaps a couple of year on sets intended for racing. Initially, the racecar sets were sold just as "Minic Motorways", but the company seemed to decide (sensibly) that perhaps people who wanted to buy a slotcar racing set might be more reassured if the box actually said "racing" somewhere.

In general, sets promoted as Minic Motor Racing sets were meant to represent professional racing circuits, with models of fast cars with racing numbers, while the Minic Motor Rally Racing sets were a little more free-form and arbitrary ... but the distinction isn't hard and fast. Should the Crime Patrol Racing Set, with a police car chasing another car, be counted as a racing set, or a rally set, or an urban Minic Motorways set?

MINIC introduce an exciting new idea! a two-car big-track Motor Rallying set with a Frontier Post that really works! The barrier goes up and down across the track automatically, and the cars have to race to get through before the frontier closes! with the frontier Post come two top rally cars, a Mercedes 220 and a 3.8 Jaguar, plus a sensational track that makes up into no less than seven different layouts!

MINIC brings you thrills of Rallying! Beat your opponent to Checkpoint Bravo before the barrier closes the track! The barrier, raised and lowered at pre-set intervals, introduces an exciting new hazard into competitions. A Mercedes 300SL in German colours is matched against an E-type Jag in British Racing Green. The compact track is laid out as a Flying Chicane Eight or Lazy Guitar, and there is a filling station for compulsory fuelling stops.

Here's a super new MINIC Rally set with a twisting eight-circuit track and two super cars plus the most exciting Rally Hazard yet! Pick a Ferrari 500 or Corvette Stingray and drive to win. You'll need plenty of skill to hold these hot cars on the road, and that's not all! Just when you are flat-out down the straight some madman in a Porsche backs out of a garage and right across the road! You've got split seconds to decide whether to slam on the brakes and finish second or dice your way through to first place!