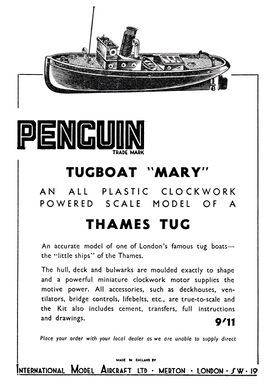 "Annie" was the successor to Triang's earlier tugboat, "Mary"

This is a lovely little model boat, including details such as a hinge-down funnel to allow the tug to pass under low bridges.

An all plastic clockwork powered scale model of a Thames Tug

A accurate model of one of London's famous tug boats – the "little ships" of the Thames.

The Hull, deck and bulwarks are moulded exactly to shape and a powerful miniature clockwork motor supplies the motive power. All accessories, such as deckhouses, ventilators, bridge controls, Lifebelts , etc., are true-to-scale and the Kit also includes cement, transfers, full instructions and drawings.

A fine working model, with folding funnel and detachable mast. Length 7½" (19 cms.). Each in coloured box.