The plane's body is a lightweight metal shell for sturdiness, but its wings are reinforced paper to save weight.

A model of the very modern high speed freight carrying monoplane, special designed for carrying mails. Fitted with the famous “Frog” patent detachable wings, a sprung steel “Dowty Type” undercarriage, aluminium spats over the wheels, and typical modern pilot’s celluloid cabin. The aeroplane is finished in the official air mail colours with the correct insignia and badges. It flies 600 feet and has a duration of about 30 seconds, and is as nearly as possible crash proof. The undercarriage is not detachable but folds back in a really bad landing. 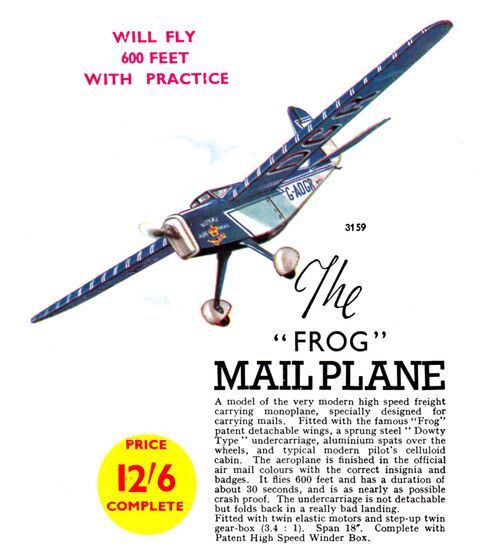 The FROG brand seems to have originally been intended for flying aircraft models (Flies Right Off Ground"), but as the company produced other sorts of model aircraft, the highly-recognisable FROG name and logotype became attached to non-flying plastic models under the sub-brand "FROG Penguin" (named after a non-flying bird). Eventually the original "flying" aspect of the name seemed to be sidelined and largely forgotten, and "FROG" became simply a brand of aircraft model, with a picture of a frog in its brand symbol.