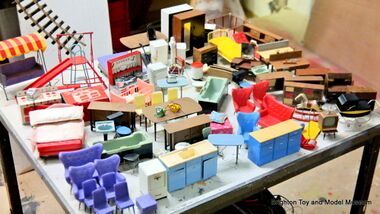 Some 1960s dollhouse furniture being sorted and identified in the museum, the great majority made by Spot-On [image info]

Tri-Ang started to produce their range of Spot-On dollhouse furniture in ~1960, at the same Belfast plant that was producing the rest of the Spot-On range, and continued making it for the next ten years.

The creation of Spot-On dollhouse furniture

Triang had for some years been known for their wooden dollhouses, which were a high-profile part of their range. The discontinuation of their wooden dollhouse furniture (due to it now being uneconomic to make), left them with an unfortunate gap – they were still selling the houses, but couldn't sell anything to fill them. At the same time, the company's Castlereagh plant was working at less than full capacity and needed to produce more products to be economic. Castlereagh was producing the plastic and diecast metal Spot-on vehicle range, and since the Spot-on brand was being extended to cover the Arkitex modern building sets, it was logical to invent a new range of Dollhouse furniture, more suited to modern mass-production, that coudl leverage the mixture of plastic and metalwork that Castlereach could produce.

As a result, the new furniture range incorporated a surprising amount of diecast metal, even when it might not have seemed strictly necessary – there were comparatively few pieces that didn't have a metal component somewhere, and this gave a sense of quality (and physical weight!) that set the new range apart from some other companies' "modern" plastic-only ranges. If a company was only using plastic, the temptation was to revise the designs to make them cheaper and cheaper to produce, whereas with the new Triang range, the fact that the company was already invested in using painted diecast components meant that there was a limit to how much they could reduce the cost with simplification – it made more sense to concentrate on quality, invoke the "Spot-On" brand's ethos of accuracy, and hope that the resulting pieces sold on the basis of their quality.

Tri-Ang's range was very different to their old ranges, not just because of its more modern materials, but because it embraced then-current 1960s furniture design and styling – where clunky all-wooden furniture could only cope with comparatively crude designs, the new metal and moulded plastics could be used to recreate Art Deco 1950s TV sets and the latest curved table and moulded seat plastic chairs with metal legs, and and Triang's designers went overboard with an all-new range of current designs, eventually including an entire range of miniature G-Plan furniture.

The range (including its two rebrandings) eventually included convincing metal fridges and cookers with opening doors, filing cabinets an Ascot water heater, and a workbench for "Dad's Room", as well and garden equipment including a swing and slide, and a range of food including cakes and bread.

The "Jennys" range put more emphasis on the personal, with dolls of Jenny and her family (and her dog), and Jenny's car, with some of the more dated-looking pieces of furniture that might have looked more suited to Jenny's parents being dropped.

The definitive story of the history and development of the Triang spot-on dollhouse furniture range is in Part 3 of the “Ultimate Spot-On” book, on pages 323-369.