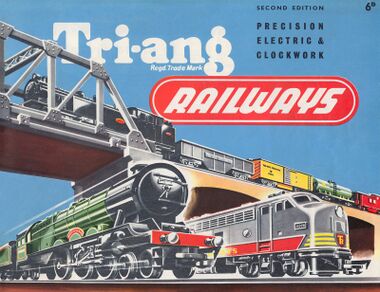 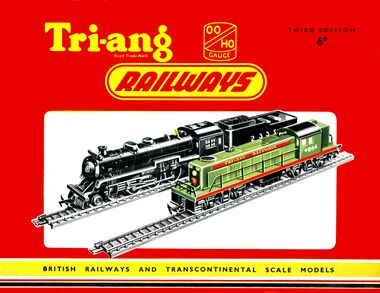 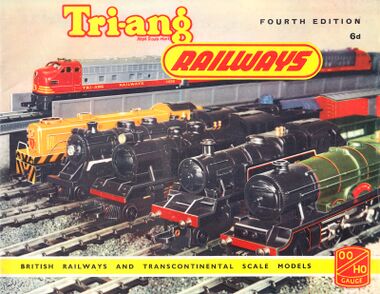 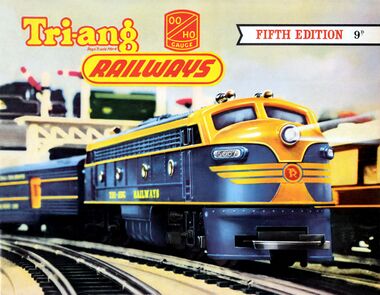 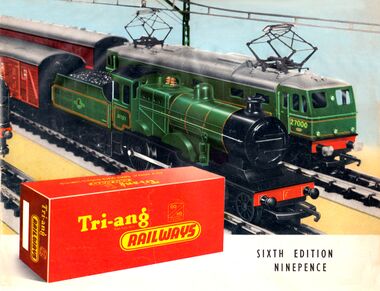 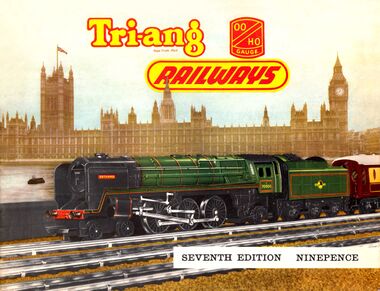 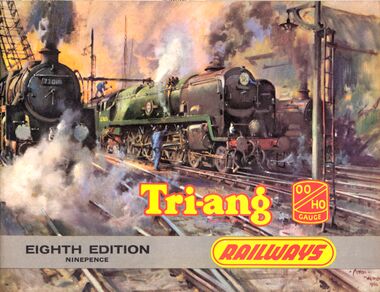 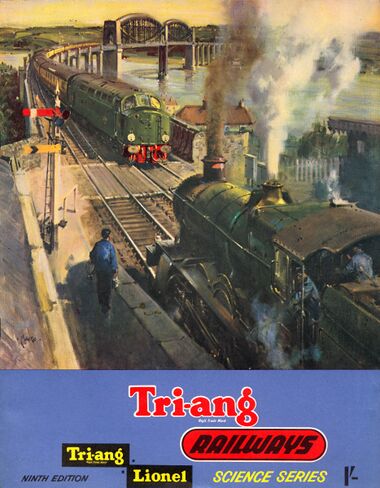 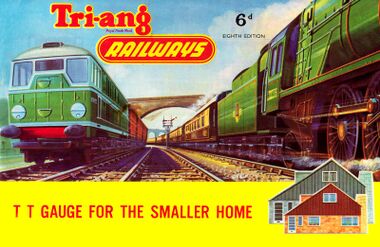 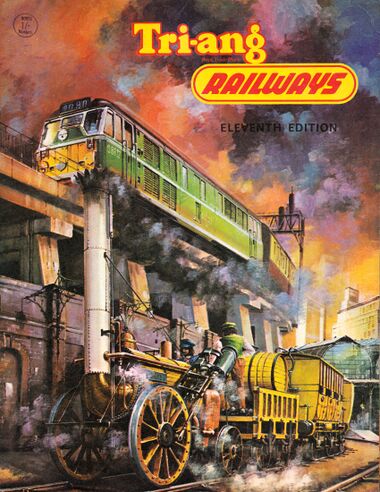 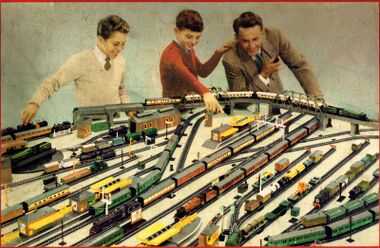 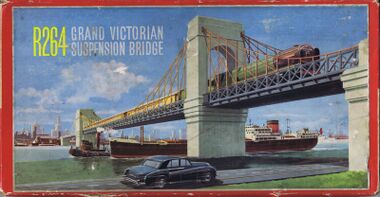 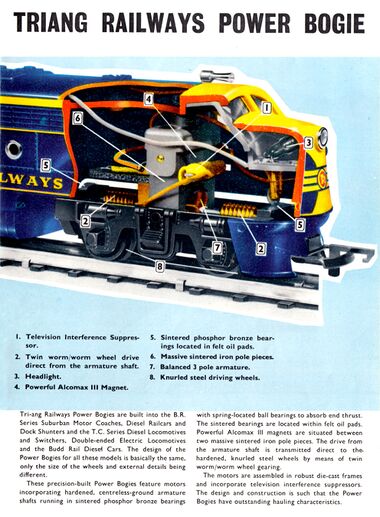 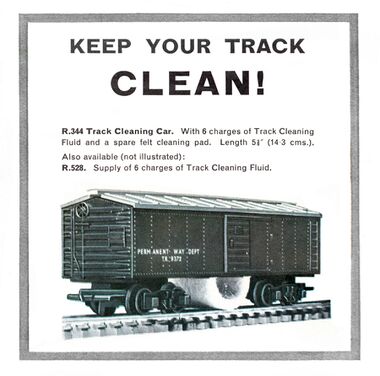 The Triang Railways brandname was used by Lines Brothers for the model railway sets and components produced for them by Rovex Plastics after they'd bought the company and relocated it to Margate. 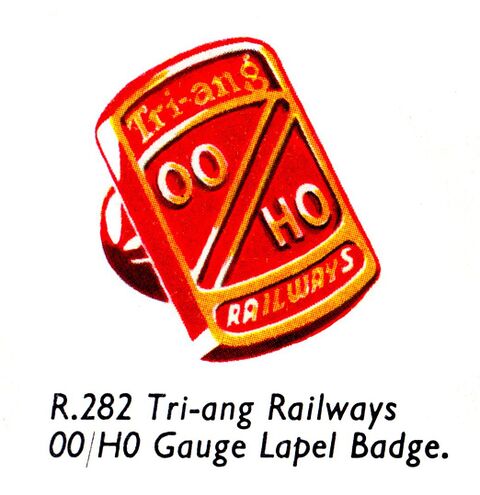 The UK mass-market for 00-gauge model railways had been created in the mid-to-late 1930s by Bassett-Lowke and Trix with the Twix Twin Railway system (TTR), a slightly clunky trail-blazer product that was deigned by the people who'd produced Bing Table Railway in the Mid-1920s, and by Meccano Ltd with their more finely engineered Hornby Dublo range almost immediately afterwards.

Both of these ranges were engineered by designers who were used to working in metal, with TTR designed to stay on the track through sheer weight and oversized wheels, and with the similarly weighty Dublo system designed to be the "Rolls Royce" of 00-gauge.

Trix focused on engineering solidity to the point of clunkiness, and Dublo products were engineered, as the advertising materials proclaimed, "To last a lifetime".

Neither company was all that worried about how much their heavy metal trains cost to produce, as both companies had been selling larger and more expensive systems - Bassett-Lowke had sold some very expensive ranges of larger model railways from gauge 1 right up to garden railways, and Meccano had been producing gauge 0 systems (Hornby Series) that, while still pretty expensive, where cheap compared to the B-L product range.

With 00-gauge model railways whipping up interest in the hobby, Rovex Plastics arrived on the scene looking for some sort of product to make with their moulding machines, and after being commissioned to produce a cheap model railway for a high street chain, were bought by the UK toymaking giants Lines Brothers and installed in a new factory in Margate, where they benefited from their parent company's engineering and marketing experience (in almost every sector but plastics), and started cranking out lightweight and affordable train sets aimed at the masses, under the brandname Tri-ang Railways. 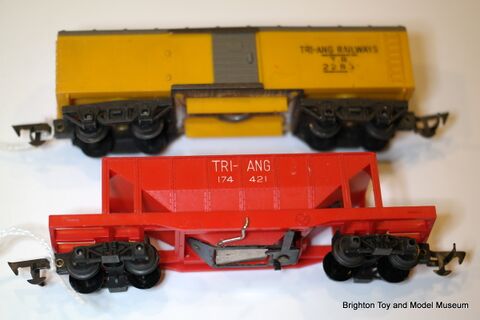 A pair of 1950s "Tri-ang Railways" wagons, with a distinctly plastic-looking finish.

With Hornby Dublo and Trix TTR both highly focused on producing ranges of specifically British trains, Tri-ang Railways decided to branch out a little more and produce models of British and North American trains, the idea presumably being that the American loco outlines would represent a "niche" where they wouldn't have to compete with Dublo and TTR. Early catalogues emphasised the transatlantic reach of the range, and since the American markets tended to use the fractionally smaller scaling of H0 rather than 00 (on the same track), which was made easier by the fact that so many of the North American locos were so much larger in real life, Triang Railways referred to their main range as being "00/H0", and tended to avoid mentioning the exact scaling used for the models.

Another factor encouraging the company to produce North American-style locos and rolling stock was that Lines Brothers had a Canadian subsidiary Thistle, which used the "Thistle" trademark (based on G and J Lines' original logo). In order for Tri-ang to continue their "push" in Canada, they had to have trains in their range that looked something like the sorts of trains that Canadian children were used to seeing in real life 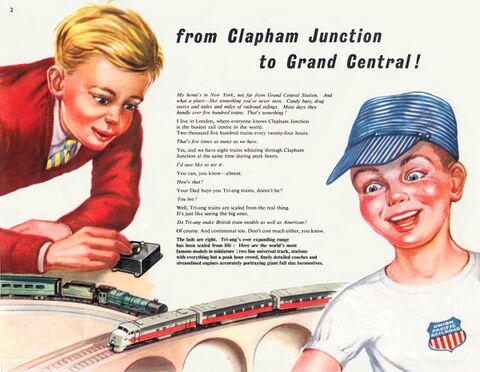 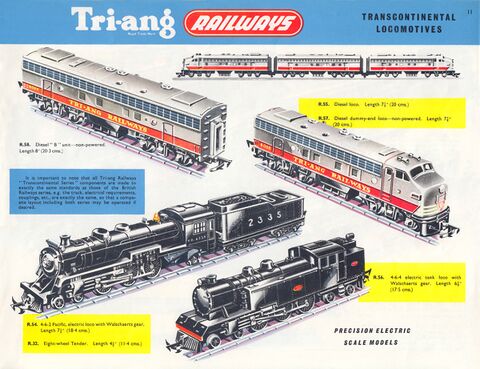 Another Tri-ang Railways "niche" was "novelty" rolling-stock – a range of "gimmick" wagons that carried searchlights or rocket launchers, an extreme example of which was the "Giraffe Wagon", a circus wagon with a giraffe's head poking out of a hatch in the roof, that would be triggered to make the giraffe "duck" whenever the wagon was about to go under a bridge. Although some of these were technically quite advanced and presumably enthralled many small children, (for instance the "helicopter wagon" with a spring in the base that could spin up its copter's blade and launch it into the air when triggered), this didn't endear the range to more "serious" model railway enthusiasts who were concerned with authenticity.

Tri-ang's "TT" or "tabletop" range (presented in 1957) was aimed at potential buyers who wanted a model railway system that was optimised for convenience. Tri-ang's TT pieces were around three-quarters of the size of their 00/HO model railways (3mm to the foot, or approximately 1/100-scale), which was considered to be the best compromise that allowed a noticeably smaller size (and lower cost), while still allowing a decent level of detailing. While hardcore enthusiasts would still probably go for H0/00, and not mind dedicating a significant amount of space to their layouts, TT was designed for people who had less space ("TT Gauge for the smaller home"), or who were less prepared to set aside large areas for a model railway.

The system was small, and neat, and still has a healthy following today.

Bodywork throughout the range is impact Polystyrene ensuring great accuracy of detail combined with correct colouring and remarkable strength.

The locomotives are designed to operate from a supply of 12 volts Direct Current. This supply can be derived form Alternating Cutrrent Mains using a suitable Transformer Rectifier, Dry Batteries or an accumulator.

Each Train Set is supplied with track to form an oval 25" × 34" and includes a remote control spring operated uncoupling track section.

Additional accessories will be introduced continually to enable a comprehensive layout to be built.

The simplicity of the mechanisms is such that a minimum of maintenance will be required. Full Tri-Ang Railways Service facilities are, however, available together with a complete range of spare parts.

After the 1964 buyout of Meccano Ltd, the merged Hornby and Triang ranges were nominally "Tri-ang Hornby", but were in practice mostly Tri-ang designs, once the existing Dublo stocks had been sold off or passed to G&R Wrenn. However,the Dublo range did leave a strong legacy on the new Triang range in that in "inheriting" the Hornby customer-base the company did, to a great extent, have to try to pull the range up to a level of UK railway-enthusiast authenticity that would be more likely to be approved of by a Dublo fan.