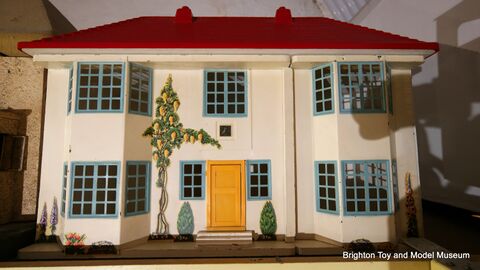 The dollhouse has a white painted metal front, with angular bay windows on the ground and first floor, on either side of a central front door. The front panel is divided asymmetrically into two sections, which (unusually) slide sideways rather than hinge. A tree and various shrubs are applied as transfers, and there is a sundial decal in the square recess aboove the front door.

The roof is a single piece of thin moulded red plastic.

The dollhouse is in really very good condition, apart from an (almost inevitable) break in the fragile moulded roof (which is symmetrical, so we've rotated it so that the damaged corner is at the back). It did have some very nasty yellow glue-marks and staining from old Sellotape (or similar) on the front, but we managed to clean them off. Other than the clean-up, the dollhouse is unretouched.

The transfers are all fresh and bright, which might make one suspect the use of "repro" transfers ... but since they were underneath the natural patina, they are old and therefore almost certainly original (the transfers used on this dollhouse series do seem to last remarkably well, party because they are laid on top of painted metal rather than wood).

One feature present on the dollhouse that is often missing is the yellow moulded plastic door and doorframe. This is in good condition – the door has a habit of being broken off its hinges by being poked open by small fingers.