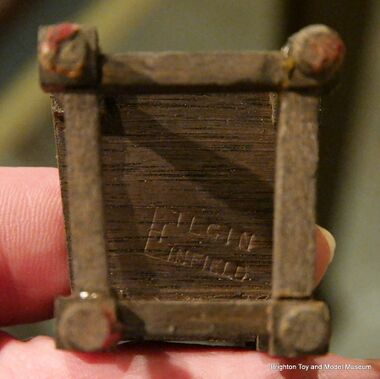 Eric Elgin of Enfield produced a rather nice range of superior-quality dark brown "Old English" wooden furniture with a distinctively-turned pattern to the legs which also appeared in other parts of some pieces.

Elgin originally sold the furniture himself, circa ~1919 (with the mark ELGIN / ENFIELD stamped into the base), but started supplying pieces to Lines Brothers without his maker's stamp, from perhaps around ~1921/1922 onwards. Lines Brothers described it in 1923 as "Old English Style" "Period Scale Model Doll Furniture", which anticipates the wording used on Triang's later ranges in the 1930s, which used Period as an explicit trademark.

Elgin continued to make the furniture for Tri-ang until 1926, after which Tri-ang took over production themselves.

As a result, dating is difficult. The Elgin marked piece would be non-Triang, but it's difficult to tell is it was exceptionally early pre-Triang (~1919-~1921), or whether it might have been produced by Elgin simultaneously with heir production for Tri-ang (~1922-1926).

The "Elgin"-marked chair is different from the rest of the chairs, but can be seen in an early piece of Tri-ang promotional material, so there was clearly a fair amount of overlap.

Further investigation will probably have to wait until we've found some way to get access to some early Tri-ang catalogues.