The model has a white and black body and yellow and black funnels. 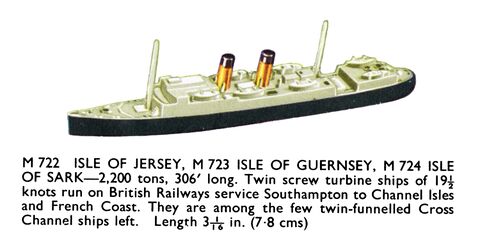 The Isle of Sark (1931-1961) was a channel steamer owned and operated by the Southern Railway Company, later to become part of the British Transport Commission.

Tri-ang Minic produced models of three British Rail Channel Island Steamers: the Isle of Jersey, Isle of Sark and Isle of Guernsey, all of which are identical except for the name and model number cast on the underside.

These models should really be called RMS Isle of Sark, RMS Isle of Jersey, etc., as they were vessels licensed to carry the Royal Mail ... indeed that was one of their main purposes. However they are simply listed by name in the Minic Catalogue of 1960.