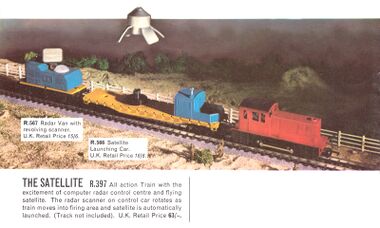 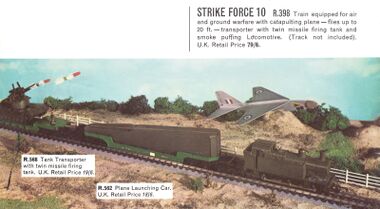 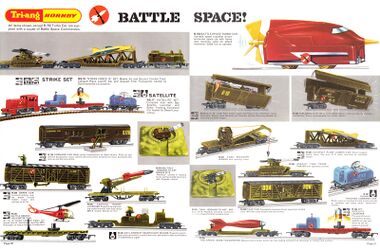 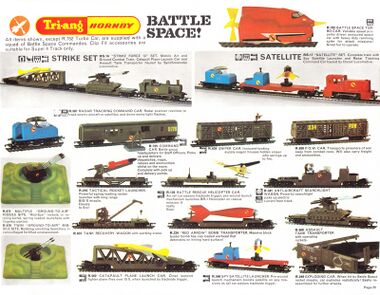 Tri-ang Hornby's "novelty" range of model railway pieces was a development of the range previously produced by Tri-ang under the "Tri-ang Railways" name.

The first two new items (the "The Satellite" train set and the "Strike Force 10" train set) appeared immediately in the eight-page May 1965 Tri-ang Hornby brochure, as the main two new items (apart from the "compatibility" track and rolling stock) to appear in the new merged range, and were proudly displayed on the back cover, which must have made Hornby Dublo enthusiasts wonder gloomily whether this was really what the future held for the "Hornby" name.

Several of the earlier novelty pieces were recycled and redesigned into "space and guns"-themed BATTLE SPACE! range, with some of the brightly-coloured items being given a khaki green makeover - while the Giraffe Wagon didn't make it into the new military-themed sets, the basic idea was reused with a few changes in the Sniper Wagon, which has a sniper pop up through the roof of the wagon when it passed a trigger attached to the track.