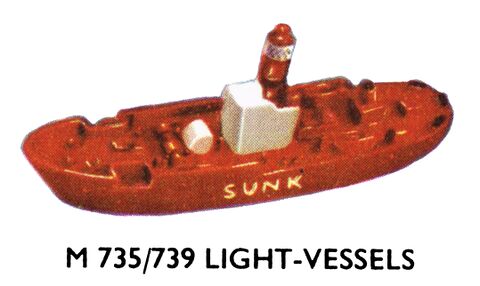 Triang Minic Ships M735 Lightship "SUNK", identical to 737 except for the painted name

Tri-ang Minic produced models of five light vessels, SUNK, SHAMBLES, CORK, ST. GOWAN and VARNE. All of the models are identical except for the name painted in white on each side. There is no model number or model name marked on the underside.

This is one of the models of British light vessels which are commissioned, operated and maintained by the Trinity House Corporation in England, Northern Lighthouse Board in Scotland, and the Commissioners of Irish Lights in Ireland. British light vessels are known by their number and are not named as such. The name painted on the side of the vessel is the name of its duty station. The model has a red and white body and no funnels due to its non powered nature.