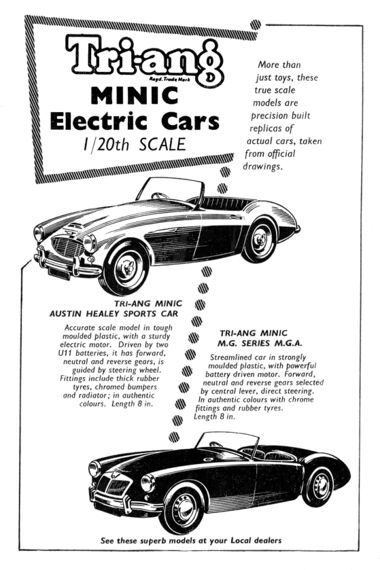 Triang’s electric 1:20 model cars range seems to have appeared in the late 1950s (perhaps circa 1958?), and was considered by some to represent the peak (quality-wise) of British plastic toy car production. The range was in some ways a continuation of the trend of the plastic-bodied Minic vehicles second series, but with a much larger scale, and electric motors.

The promotional materials featured a view of the Minic Limited factory in Canterbury, Kent, although production is thought to have moved to the Rovex factory in Margate in the early 1960s.

End of the line

In some ways this Minic range represented a dead end. Customers who wanted electric-motored toy cars were more likely to be enthralled by the new slotcar craze, or by large radio controlled models, rather than something that just went in a straight line and had to be retrieved. Buyers who wanted large expensive high-quality display models wouldn’t necessarily want motors, and would tend to shun plastic and hanker after premium diecast models, or premium kits like Pocher's range, whereas those on a smaller budgets could make their own high-quality models from model kits (usually unmotorised), which were proliferating in the 1960s.

Victory Industries had also been making occasional high-quality models of plastic vehicles, sometimes partly as promotional models with the cooperation or the original manufacturers, but Tri-ang's entry into the market seems to have signalled to Victory that perhaps it was time to leave this only-marginally-profitable market and concentrate on mass-market slotcars, and if one wanted something other than a slotcar system for racing, Tri-ang were producing their model-railway-scale Minic Motorways system.

Like Victory Industries, Triang’s motivation for producing this sort of model seems to have been that they could – it was something that their designers could take pride in producing – and that once it was in the shops, it’d hopefully find its own market. Perhaps they also saw the Victory models and thought that if Victory could make money from this sort of product, economies of scale meant that they shoudl be able to do better. However, this period also marked the point at which far-Eastern manufacturers started importing cheap plastic toys in quantity, and the association of “plastic” with “cheap” meant that further British plastic-shelled cars tended to be either part of a plastic kit range or slotcars (with metal chassis).

Triang did also produce the MINIX car range, but this was unmotorised and the much smaller 1:76 scale, sized (like Minic Motorways) for model railways.

POWER SUPPLY: The motive power is provided by 1½ volt torch batteries. Each car requires two batteries except the Rolls-Royce and Bentley, as they are somewhat larger. Recommended batteries are Ever Ready U.11, Drydex T.15 or equivalent. A printed label will be found insicde the battery recess in all cars, indicating the way in which the batteries should be fitted. When putting batteries in the Rolls-Royce and Bentley fit the two outside ones first, followed by the centre one. Do nor force the batteries in. If they seem tight, check that they are the right way round. To take out the batteries of the Vanwall, remove the driver’s head, and push his ‘neck’ downwards. This acts as an ejector. It is recommended that batteries always be removed from cars when not in use, as they may deteriorate and causer damage to the contacts. Metal case batteries are not recommended.

STEERING: All cars operate forward-stop-reverse except the Vanwall, which does not have a reverse gear. The operating lever of the cars is situated underneath the chassis at the rear, with the exception of the Rolls-Royce and Bentley where the lever is on the off-side.

This is the range listed in the undated leaflet we have:

Other accessories were listed that could convert a Jaguar into a police car, convert a car into a driving examiner car, and so on. Whether many of these were produced (or survived) is uncertain.